The win allowed the Hall to improve to 6-1 on the year, and 2-1 in the A Conference, after a season-opening loss to Archbishop Spalding in extra innings. The game was originally scheduled to be played in Brooklandville, but was switched to the turf field at Carl Crispino Stadium Conference when the Crusaders’ field was deemed unplayable due to the weekend rain.

Delp gave up a solo home run to Jamal Wade in the top of the first, but he kept the Crusaders (7-1) off the board the rest of the way. Wade started on the mound for St. Paul’s, and he retired the first eight hitters he faced before Tyler Webster singled in the bottom of the third.  Wade got the first two Hall hitters to start the bottom of the fourth before giving up a double to Brandon Dorsey, and a RBI single to Manny Rodriguez. Rodriguez would then score on a Crusader miscue to give the Cards a 2-1 lead. 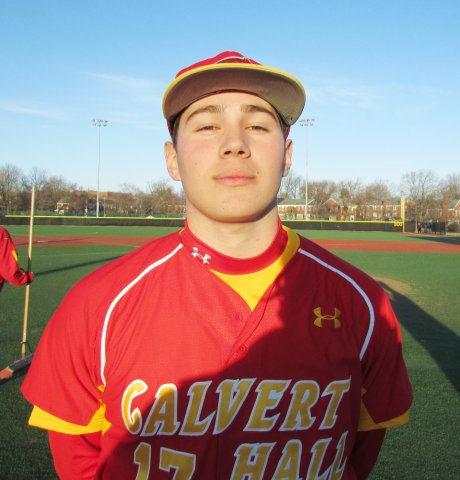 Delp said his fastball was working, and he had good location.  “St. Paul’s has a lot of good hitters.” On the only run that he surrendered, Delp said that Wade hit an inside fast-ball.”

Dorsey said he was seeing the ball well at the plate, and he credited Delp with a great job on the mound. “He only threw one bad pitch all day.”

Rodriquez had kind words for Wade’s performance on he mound. “He had a no-hitter through 2.2 innings, and got the first two batters out in the fourth. He did a good job.”

The Hall will travel to No. 12 Archbishop Curley on Wednesday, and St. Paul’s will host second-ranked Gilman, a 10-0 winner over Mount St. Joe on Monday.

Lower seeds prevail in MIAA B baseball opening round