With manager Lou Eckerl sidelined with COVID, Cardinals begin their quest to win a title in their coach’s final season

More history was made at Carlo Crispino Stadium in Towson on Tuesday afternoon, as host Calvert Hall pulled out a come from behind 11-6 win over visiting Archbishop Curley in the MIAA A Conference double-elimination playoffs, to advance to a winners bracket final showdown with top-ranked Archbishop Spalding on Thursday. 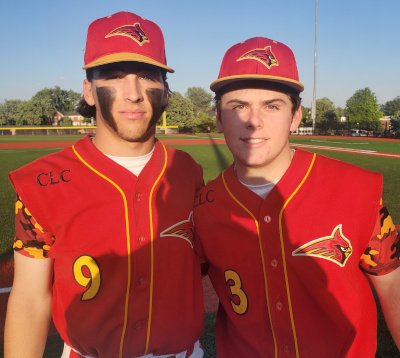 Ryan Perry (left) and Jack Kerr combined to hold the Curley hitless over the last four innings, which allowed the Cardinals overcome a 6-2 deficit to notch a come-from-behind 11-6 win.

Before the season started, Calvert Hall coach Lou Eckerl announced that he would retire after 21 seasons as the Cardinals’ head coach. On Tuesday, Eckerl missed his first-ever game against a league opponent as the head coach, after testing positive for COVID-19 last week. He has been quarantining at home, and will return to the dugout on Thursday.

Long time assistant Brooks Kerr took over on Tuesday and made a few lineup changes which paid off.

Kerr moved both catcher Lamar King and centerfielder Chase Davalli up one spot in the batting order. After leadoff hitter Jake Butler walked in the home half of the first inning, King hit a booming two-run homer to left. Curley had taken a
1-0 lead in the top of the first, on a RBI double by Ryan Edmonds.

Davalli would go 3-for-3 with a walk and two RBI.

Kerr moved also first baseman Connor Keys from the second hole to the ninth slot, and Keys got a clutch 0-2 single that put the Hall ahead 7-6 in a huge six- run fifth inning.

“I got more fastballs today,” said Keys. “I was looking for anything that would help me get the job done. We dug deep today. Not having Coach Eckerl here turned out to be great motivator. Our goal was to get this win for him.”

“It means a lot to get this win for Coach Eckerl,” said Davalli. “This was a team win. We all started hitting after we were behind. Hitting is contagious. One guy gets going, and then everyone else gets going. “We really came together as a team.”

The Georgia Tech commit is 13-for-16 in his last five games, lifting his average to .506. He has 13 homers on the season. King raved about the work of pitchers Ryan Perry and Jack Kerr, in relief. “They both threw really well and they both did a great job. I was especially impressed with Jack (Kerr) because it’s so long since he has been on the mound.”

Jack Kerr, the son of coach Brooks Kerr had not pitched all season. He and Ryan Perry held the Friars hitless and scoreless over the last four innings of the game, after Curley sent 10 men to the plate and scored five times in the top of the third to take s 6-2 lead. Perry picked up the win.

“I was just putting the ball in play, and letting our defense do the job,” said Perry. “I was just trying to throw strikes and I wasn’t really trying to strike anybody out.”

Perry added that his curve ball was really working well. “Our goal is to send Coach Eckerl off with a championship. We do all this for him.”

Jack Kerr talked about how much it meant for his father to hand him the ball in relief.

“It’s great that my dad, who was the head coach today, had that much trust in me. I got in the zone when I got on the mound, and I relied on my fielders and they made the plays.”

“As a coach I’m ecstatic for him, and as his father I’m proud of him,” said Coach Kerr. “This was a team win. Coach Lou will be back on Thursday. We did today the things that we always work on together. Lou trusts what we do, and he gave me the opportunity to do this.”

On the lineup changes, Coach Kerr said, “We wanted to move Lamar (King) and Chase (Davalli) up in the lineup so that they would get more at bats, and we needed to be sure that we would have both of them batting in the first inning.”

On his son’s performance the coach said, “Jack has been on the shelf and not pitched all season. He was 86-89 with his fastball today. He and Ryan (Perry) did the job.”

Ryan Edmonds, Hunter Layhew and James Gladden all had two hits for the Friars.

Curley coach Joe Gaeta was proud of his team.

“We hit the ball today,” said Gaeta. “We’re going to have to come back and play hard on Thursday. Today’s game was typical of this league. Calvert Hall is a good team. They have some pop in their bats and they showed it today.”

Pictured above: (From left) Chase Davalli had a perfect day at the plate with three singles, a walk, two RBI and a run scored; Lamar King smashed his 13th home run while also getting a walk, a single and had two RBI, and Connor Keys had two RBI.