Dylan Aguilera smacked a two-run home run in the bottom of the sixth inning to help to lead fifth-ranked Calvert Hall College from one run down to a 4-3 MIAA A Conference baseball victory over No. 4 Mount St. Joseph, Friday night in Towson, giving Cardinals’ skipper Lou Eckerl his 461st victory at the Hall and 510th overall. 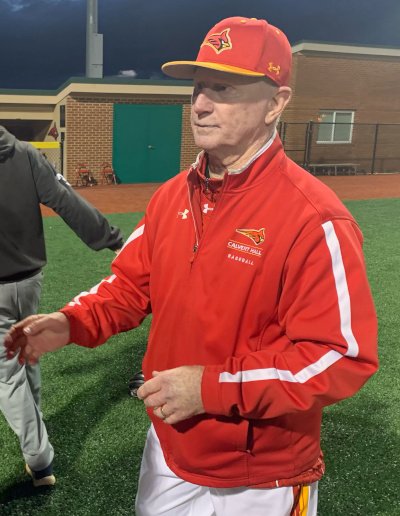 With the 461 wins, Eckerl is the winningest coach in school history, surpassing his predecessor and mentor Joe “Snooky” Binder.

“I am very humble about this,” said Eckerl, who will retire at season’s end after 21 years as coach and 40 as the school’s athletic director. “When I look back on this, I’ve had great assistant coaches, great players and that is what it takes to have this happen. I’ve had great support from the school, great mentors, like Joe Binder, who I worked with for 13 years.”

Calvert Hall (7-3 overall, 4-1 MIAA A) struck first in this back-and-forth battle as Tyler Gibbons staked them to 1-0 lead with an RBI single in the second. St. Joe evened the score at one with an RBI single off the bat of Landon Cooley in the top of third and took a 2-1 lead on CaMaury Arrington’s RBI double in the fourth.

Gibbons scored Calvert Hall’s second run after leading off the fifth inning with a single and scored from second on a passed ball on a third strike, which allowed Jake Butler to reach base.

The Gaels (8-4, 2-2 MIAA A) then inched back in front in the top of the sixth when Tanner Vicendese reach on an error and promptly scored on a triple by Jack Bahouth.

Ryan Perry came in to pitch the seventh inning for Calvert Hall and struck out the first two batters he faced. He then walked Ripken Reese, before getting Cooley to pop out to end the game.

Calvert Hall seniors Lamar King and Chase Davalli, who have played for Eckerl since their freshman years summed up the team’s admiration for their coach.

“He is the winningest coach,” said King. “He has developed a lot of guys. He is always there if you need him or need help with anything.”

“It was a real team win,” said Davalli. “He’s developed all of us. He’s preached to stay off social media and just focus on us. That’s what we have been doing throughout the season, focusing on us, how we make our guys better.”

Eckerl, as is typical, deflected the focus to his players, especially the seniors.

“I’m really happy for our seniors,” he said. “This is their senior year and I want them to go out as winners. I want the underclassmen to support them and to continue the winning tradition we’ve always had here at Calvert Hall in baseball.”