Calvert Hall puts on a show

Calvert Hall College came to play and oh, how the Cardinals played – near perfect baseball.

The top-ranked Cardinals ripped Loyola Blakefield, 9-0, on Sunday in the MIAA A Conference finals to force the “if necessary” game in the double elimination, tournament in front of over 1,000 fans at Harford Community College’s Thomas Run Sports Complex. The Cardinals (27-3 overall) and Dons (12-14) will play again on Monday at 4 p.m. at HCC, to determine the 2017 champion.

Calvert Hall is going after its 28th MSA/MIAA championship, with the first coming in 1929 and the last in 2013 – the most ever in the state. Meanwhile, Loyola last won the title in 1946 with former Baltimore City Mayor Thomas D’Alesandro as one of the players.

Here in 2017, Calvert Hall fans, parents and school personnel, not to mention the team and its coaches will long remember the show the Cardinals staged on Sunday. Senior right-hander Matt Hentschel was brilliant in posting his 10th victory of the season while the defense behind him, particularly the left side, shortstop Jose Torres and third-baseman Gabe Nieto, was flawless and at times spectacular.

In addition, the Cards swung the bats shooting rockets all over the well  groomed turf field at Thomas Run. Calvert Hall came out hacking against Loyola starter Jack Glock and with their nine hits, six by the bottom of the order – the 7, 8 and 9 hitters. Getting at least one hit in every inning and scoring at least one run in every inning, with the exception of the third and fourth, the Cards ran the Dons out of Harford County and back to Blakefield.

“Absolutely, it was our most complete game of the season,” said Calvert Hall veteran coach Lou Eckerl, who has led the Redbirds to seven MIAA titles, four short of the school record won by Joe “Snooky” Binder, who was in attendance Sunday. 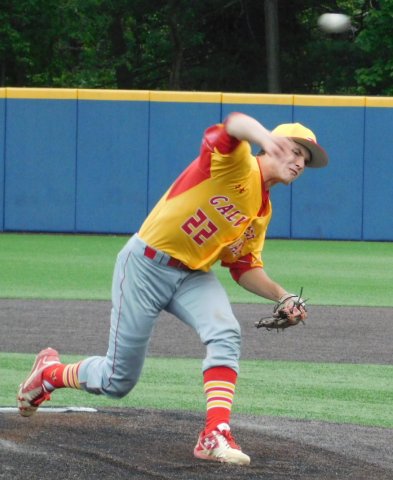 “The kids get excited to play for Matt (Hentschel) and our defense played great and our left side made some phenomenal plays. And we really hit the baseball.”

AJ Holcomb, who just might be the best high school hitter in the metro area, was the lone bright spot for Loyola, getting the only two hits that Henschel gave up. Hentschel threw only 74 pitches and struck out six Dons, walked one (the first batter Miguel Mateo) and hit Chris McDonald twice with a pitch.

“Coach Lou stresses keeping the count low and staying ahead and that’s what I was able to do today,” said the 6-foot-1, 190-pound Hentschel, who is headed to Emory University in Atlanta. “My curve ball was working along with my two-seam fast ball.”

His left side of the infield was also working. Senior third-baseman Nieto had three assists, one putout and two sensational plays, one a backhanded stab behind third and the other on a charge to his right followed by an off-balance throw to first.

“I have full trust in my defense on any ball they field,” said Hentschel.

It was a ditto for Hentschel from Nieto, who said, “We are able to rely on Matt.”

Torres, who Nieto said “plays beyond his years,’’ pointed to the communication he has with Nieto.

“We communicate really well and in fact, this entire team does,” said Torres. “It’s fun playing with this group.”

And when you swing the bat the way Redbirds do, it can be a lot of fun.

The Hall’s No. 3 hitter, junior right-fielder J.P. Murphy belted his club leading fifth homer in the top of the sixth inning. The solo bomb was his second hit of the game and the solo shot enabled the High Point commit to tie catcher/cleanup batter Garrett Matheny for the team lead in RBI’s at 26. Murphy also leads in batting average at .462 (43-for-93) while Matheny, who is committed to Radford, is right behind at .410 (32-for-78) after going 0-for-2, but scoring a run and reaching base twice on pitches that hit him.

That potent middle of the order has been a regular story most of the season, but in the Hall’s latest appearance in the finals, the offensive story was at the bottom of the order. The 7th and 8th batters, Nieto and center-fielder Michael Poling had three and two hits each respectively and No. 9 hitter, second baseman Spencer Blair had a two-bagger in the second inning off the wall in left-center that led to two runs and a commanding 5-0 lead behind Hentschel.

Nieto had two RBI’s along with Elmore, the 5th hitter, leaving them with 23 and 24 RBI’s each, respectively, after the latter knocked in his first and Nieto his two in a three-run first at-bat. Elmore laid down a squeeze bunt for his second RBI in the second. 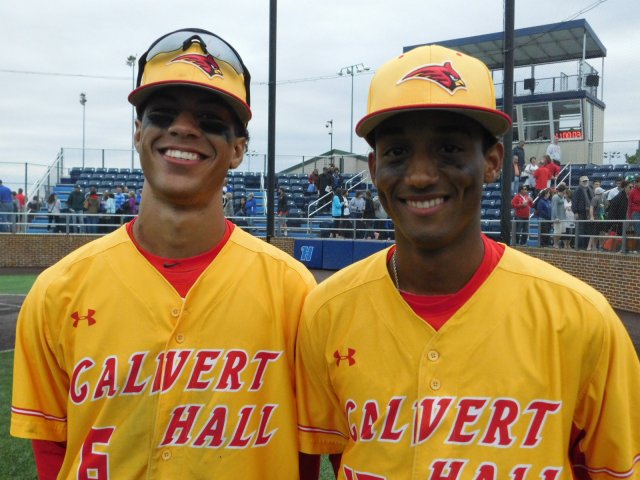 Calvert Hall scored its last two runs in the top of the seventh on the strength of Blair’s sac-bunt and a sacrifice fly by leadoff man, Brendan Webster.

“We were never out of it because they were bunting in the seventh,” said Loyola coach Mike Kelly, whose team pulled off the rare feat of upsetting the top two seeds – No. 1 Calvert Hall and No. 2 Archbishop Spalding – this past week to advance to the finals. “That (bunt) was a sign of respect.”

Eckerl agreed there is a lot of respect between the two teams.

“I take my hat off to Loyola for what they have done,” said Eckerl. “This final was perfect with the two top arch-rivals in it.”

They will settle it on Moday, weather permitting.

Falcons live to fly another day