After falling to Mount St. Joseph in last year’s MIAA A Conference basketball championship, Calvert Hall, with a plethora of Division 1 talent returning, was everyone’s consensus choice to return to UMBC’s RAC Arena and hoist the MIAA championship plaque this season. 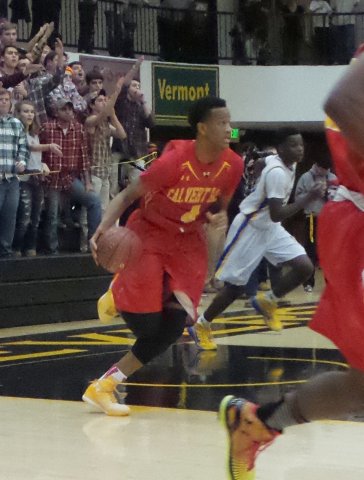 ed those prognostications correct, but it certainly was not the cake walk some expected. The Cardinals battled through injuries, a mid-season slump and, on Sunday, the biggest obstacle of all, a white hot Mount Carmel squad.

The Cougars (26-7) rose from just a nose above .500 to the area’s top-ranked team on the strength of an amazing 19 game winning streak. That streak, however, came to an end on Sunday as Calvert Hall proved to have a little more depth in holding off a fast closing Cougar squad for a 71-68 victory.

Leading by one at the half, Calvert Hall asserted itself in the third quarter, stretching its advantage to eight points. The Cardinals then opened a very physical fourth quarter on a 12-1 surge to take a commanding 63-46 lead with 5:17 to play. But, what could have been an enjoyable closing segment of the game nearly turned into a nightmare for the Cardinals, as the Cougars stormed back.

The Cougars came at the Cardinals from every defensive angle, hit big shots and took advantage of some shaky Calvert Hall free throw shooting to get within three, with the ball, with five seconds to play. Mount Carmel’s Terry Nolan, who scored eight points in the final five minutes of play, took aim at a potential game-tying three, with less than five seconds to left, but the shot went in and out, and Calvert Hall was able to lock down just its second MIAA A Conference title with the rebound.

The Cardinals had not won the league title since 1995-96, the first year the MIAA was in operation.

The game was physical, but clean, throughout. In the fourth quarter, the intensity reached a boiling point. After both teams absorbed hard fouls, some pushing and shoving ignited that led to the ejection Mount Carmel senior point guard Frank Webb. Later, Calvert Hall’s Evan Phoenix picked up a second technical and was also disqualified from the game. At the time of the incident, Calvert Hall led 55-45 and then scored eight of the game’s next nine points to establish its 17 point lead, as a timeout was called.

Calvert Hall coach John Bauersfeld knew his team was not out of the woods yet.

The Cougars got three hoops from Will Jenkins, a pair of free throws from Nolan, and a sensational follow-up slam from freshman Montez Mathis, who later hit a three pointer to bring Mount Carmel within six, at 65-59, with 1:37 to play.

Junior Justin Gorham, who led the Cardinals with 16 points, got a key basket, but missed three free throws over the next 30 seconds. Mount Carmel countered with a free throw from Brain Jefferson and a basket from Nolan, before Gorham slammed home two more points to keep Calvert Hall in front, 69-62 with 35-seconds to go.

Nolan continued to rally his team with an old fashioned three-point play as the Cougars continued to send the Cards to the free throw line. Drew Edwards and Kenji Bihard each went 1-of-2 on consecutive trips as the Cardinals led 71-65 with 20 seconds left. Nolan, who did everything but hit the final shot, added one more three, but Mount Carmel ran out of time.

In addition to Gorham’s 16 points and 11 rebounds, Calvert Hall, as expected, got big games from its three Division 1 bound seniors – Edwards, Phoenix and Nico Clareth. All three reached double figures and combined for 38 points.

The key man, however, was Rouse. When the Cardinals struggled in January, with three consecutive losses, it coincided with when Rouse was out of the lineup with an injury. Sunday, he scored 14 key points, including 12 in the second half. Rouse, who also had three assists and two steals, asserted himself at the behest of his coach.

“I told him, if guys are going to key on Drew and Nico, and Justin and Evan, they got to guard you and he took it very literally,” said Bauersfeld. “He came out and finished and made big shots, made free throws, made great decisions.”

Rouse said he was just trying to do what was needed.

“We started going up. That’s when I started attacking,” said Rouse. “My coach told me to be aggressive because they weren’t really expecting me to be a scorer this game.”

Bauersfeld understands the luxury he has in a senior class with so much talent and experience and he was proud to see them rewarded with a championship.

“I’m just so proud of our seniors and the whole team. That senior class, I am so proud of them how they have grown over the last four years. It’s been great to watch.”

Mathis led Mount Carmel with 18 points and Nolan had 16. Jenkins overcame a slow first half to score 12 in the second half and finish with 14 points. He also had six rebounds. In addition, Webb finished with 12 points for Mount Carmel.

“Our effort has been outstanding all year. You can’t fault these kids. Our effort is always there and that is what we pride ourselves on,” said Mount Carmel coach Tom Rose.  “We weren’t scoring, I though we missed some easy shots and then we weren’t stopping them. I thought Calvert Hall did a very good job of being patient and getting to the rim. That’s what hurt us.”

Both teams will get back to work on Monday as they prepare for another potential showdown this weekend at the Baltimore Catholic League Tournament.  Calvert Hall will begin BLC play on Thrursday (5:00 p.m.) as they face Archbishop Spalding at Mount St. Joseph.  Mount Carmel will travel to Calvert Hall on Friday to face St. Joe in its first round game (5:00 p.m.).

Spalding and Curley win again in A Conference baseball

No. 11 John Carroll tops No. 6 C. Milton Wright in overtime