Hill Academy (Canada) rallies from two down late in the fourth

by Dave Larkin
In what has morphed into the unofficial boy’s high school lacrosse championship of North America, Calvert Hall and Hill Academy of Ontario, Canada renewed their annual rivalry, Wednesday, on the turf at the Hall’s Kelly Field and treated the fans in attendance to an overtime thriller, as the Canadian visitors slipped away with a 10-9 win over the two-time reigning MIAA A Conference champion Cardinals.
The game-winner came just 26-seconds into the extra-time, as Hill won the OT draw and, after a timeout, Dyson Williams found some space to blister home his third goal of the game. 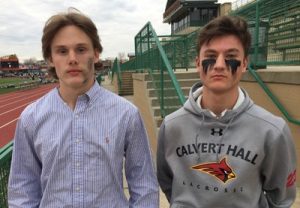 Senior attackman Jack (Sauce) Sawyer scored five goals and had one assist, and junior goalie Jackson Marshall sparkled in the net with 13 saves for Calvert Hall, but the Pride provided just enough tenacity and firepower to notch the thrilling come-from-behind victory.
The game was also special because it was played with devotion to the late Dave Huntley, a Canadian lacrosse legend, both as a coach and player, who was also a lacrosse All-American at Johns Hopkins University and a long-time assistant coach at Calvert Hall. He was a dear friend of Calvert Hall coach Bryan Kelly and a mentor to Hill coach Broadie Merrill.
The Hill Academy is widely regarded as the premier lacrosse program in North America. The Pride, coached by Merrill, the esteemed former All-American and Georgetown Hoya, use a fast-paced attack, frenetic passing, rugged defense, and impressive teamwork to overwhelm most opponents as they did on Tuesday when they vanquished Archbishop Spalding, 22-10.
The talented, athletic, and championship proven Cardinals gave the Pride all they could handle, as they led for most of the game, and held a 9-7 lead with 8:56 left in the fourth quarter.
Calvert Hall (2-1) won the opening face-off and took the first four shots of the game, chewing up almost four minutes of game clock before Cardinal freshman attackman Truitt Sunderland sprinted from behind The Hill goal, and deposited a right-handed bullet for a 1-0 lead with 6:21 left in the first.
The Cards continued to dominate first quarter play as they unleashed several quality shots, maintaining possession and gaining confidence. After senior midfielder Grant Mitchell gobbled up a loose ball following a shot that drew iron, he fed the cutting Sawyer for what looked like a sure goal. The Hill goalie stifled the right handed quick-stick from Sawyer, made a quick clearing pass to a sprinting middie, and in the blink of an eye, attackman Josh Zawada found middie Jack Boyden in the Calvert Hall crease, and the game was tied 1-1, with 2:05 left in the first.
Calvert Hall goalie Jackson Marshall set the tone for the second quarter as he made several outstanding saves to thwart an onslaught of Hill attacks from every angle, some from point-blank range. When Sawyer found junior attackman Daniel Kelly cutting down the right alley, he hit him in perfect stride and Kelly whipped a rocket high-right for a 2-1 lead halfway through the second. With 5:15 left in the half, Sawyer juked his man left, sprinted right and tickled the twine to put Calvert Hall up 3-1. Attackman Adam Poitras and midfielder Graydon Hogg scored back-to-back goals for Hill to tie the game at 3-3 with 3:04 left in the half. Following a Hill turnover, freshman attackman Sunderland made them pay when he pumped in a left-hander for his second tally to put the Cards up 4-3 at the half. 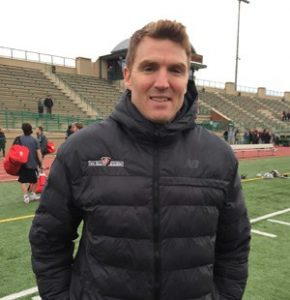 The Hill Academy came out of the locker room with a renewed determination in the third quarter, using their smothering defense, signature fast-break, and high pressure offense to score three straight goals to take a 6-4 lead halfway through the third. Calvert Hall fought back when Grant Mitchell used his patented bull-dodge to find a streaking Sawyer to cut the deficit to 6-5 at the 4:46 mark. Using a man-up opportunity, Calvert Hall junior middie Cole Herbert found Sawyer in the crease who casually tied the game at 6-6.
Although Hill face-off specialist James Turco was now starting to dominate the X, Marshall continued to frustrate the Pride, stopping several more quality shots to keep the Cards alive. With 2:59 left in the third, “Sauce” Sawyer, again attacked from the left of the goal and scored his fourth tally, putting the Cards up 7-6. Daniel Kelly then scooped up a deflected shot and fired in a head-high blur to put Calvert Hall up 8-6 to end the 3rd.
The fourth quarter was a dramatic and thrilling display of talent, speed, athleticism, teamwork and emotion that truly makes amateur sports so special.
The Hill Academy needed only 30 seconds to close the gap to 8-7 when attackman Williams buried a shot off a feed from Zawada. The Hall stretched the lead to 9-7 about two minutes later when Herbert bullied his way through a massive scrum to grab a ground ball and fed Sawyer who again found the back of the net like he owned it.
Calvert Hall now had a two-goal lead, but one big problem – too much time on the clock. With 8:12 remaining, Zawada again stepped up when he found a cutting Poitras who quickly changed hands and went low to high to close the gap to 9-8. Calvert Hall had their chances, but with 3:03 remaining Hill took a missed shot, quickly got the outlet pass to middie Matt Acchione who sprinted down the lane from midfield and whistled in the tying goal.
Calvert Hall kept its poise and with two minutes left, created a turnover, called a timeout, and called on “Sauce” to do his thing. “Sauce” was well on his way to the goal when he received what can only be described as a mugging. The Cards now had a man advantage, very little time, and no “Sauce.” They missed their best opportunity with 1:01 left, and this incredible match went to overtime.
Turco grabbed the overtime face-off, and The Hill called a timeout. The clock ticked another 26 seconds, and about 20 passes later, Williams took a feed from Hogg and deposited the ball in the back of the net with ferocious authority.
“We started out of a set play,” said Merrill of the final goal. “The first look wasn’t there and we kind of played out of it. That’s what Dyson does, he finds the soft spots where he can catch and shoot. That’s a big strength of his.”
Merrill talked of the great battles his club has had with Calvert Hall.
“It’s always a fun game here,” said Merrill. “It seems like it’s always tight and they are always going to be such a well coached team. They have toughness about them and they kind of go right at you. There are a lots of ups and downs for the game, but I thought it was a great lacrosse game. It came down to who was going to get that last possession, we were fortunate enough to get it.”
Kelly was proud of his troops, but felt they let an opportunity slip away.
“We are playing a team which has been playing since September,” said Kelly. “We have been playing since February, so I look at that type of game, it’s a great measuring stick. You want to win, we’re bummed and it stinks that we didn’t win because I think we played good enough to win that game. I felt like they earned a couple goals, but no disrespect to them, I think we gave them a couple and let some get away. That’s what makes it frustrating.
“It gets us ready. This is just the beginning. We have to build on it and learn from it. Each and everyone of us, from a coaching side and playing side, we all left something out on that field. We could have done something differently or better. You build on it. You want to get better and I think, hopefully, we will.”
Both coaches also reflected on Huntley.
“I have a lot of respect for Hill,” said Kelly. “I’ve gotten to know Broadie through Dave, so for us, we always love to play the game, even though it’s a physical game. Guys are beat up. But its a special game and I have a ton of respect for the Hill Academy.”
“Coming down here, he was someone who was a great presence for me,” add Merrill about Huntley. “A great mentor. You definitely feel his presence still and we just miss him. He’s had such a big impact on Canadian lacrosse, more than what many would know, and you definitely see players out here who were influenced by him in some way. It’s a pretty special game.”
How special?
“That is the most lacrosse talent I will see on one field all season,” said Inside Lacrosse recruiting guru Ty Xanders. “At least 40 Division 1 players out there.”
Pictured above: Hill Academy’s Dyson Williams watches as his game-winning shot pulses into the back of the net in overtime. (Photo courtesy of Mike Ryan)
HILL ACADEMY 10, CALVERT HALL 9, OT
HILL 1 2 3 3 – 1 – 10
CH 1 3 2 3 – 0 – 9
GOALS: HILL: Boyden, Poitras 2, Hogg, Zawada, Williams 3, Acchione 2; CALVERT HALL: Sawyer 5, Sunderland 2, D. Kelly 2
ASSISTS: HILL: Zawada 3, Hogg; CALVERT HALL: Sawyer, Mitchell, Herbert.
SAVES: HILL 11; CH Marshall 13.