In a free-wheeling affair, No. 4 Calvert Hall and No. 3 Boys’ Latin combined for 29 goals, as both teams opened MIAA A Conference lacrosse league play at the Hall’s Kelly Field, Tuesday. The host Cardinals held off a furious closing rally by the Lakers to claim a thrilling 15-14 victory.

Calvert Hall (8-1, 1-0) opened a 15-11 lead on an unassisted goal by senior Timmy Kelly, his fourth tally of the day, in the opening minute of the fourth quarter and maintained that advantage for most of the final period. With 2:10 to go, however, Devin Shewell scored an unassisted tally, and then, with 1:48 to go, he scored his game-high fifth goal to cut Calvert Hall’s advantage to 15-13, and the Lakers were not done yet.

As the clock hit one minute, Luke Shilling added another unassisted score, to cut the Lakers’ deficit to one and Boys’ Latin had one last chance as the final seconds expired, but could not quite get a long shot on goal.

Neither coach seemed particularly pleased with their defense in the post-game, but that may have had a lot to do with the considerable offensive talent on both sides.

In addition to Kelly’s four goals, Calvert Hall also got four scores from senior Jason Brown and the pair combined for three assists. Also, Luke Ciccarone scored twice, while JT Bugliosi and Jack Kinnear each had a goal and an assist.

While Shewell ripped the nets five times for BL (8-2, 0-1), Logan Wisnauskas and Patrick Spencer each had five points for the Lakers, both scoring a pair of goals and each dishing out three assists. In addition, Luke Shilling and Anthony Wyler each had a pair of goals for BL.

“We’ve been happy with our offense all year so far, but we have to do a better job defensively. We have a lot of work to do on that end of the field,” said Calvert Hall coach Bryan Kelly. “At halftime we challenged our defense and wing play. We needed to do a better job on the wings and I thought we did. I thought in the fourth quarter, the last four possessions, I thought BL really showed the great competitiveness of their team and they got the balls on the wing on the face-offs and did a great job.”

Despite the defensive deficiencies, the Cardinals would not have won the contest without the play of junior goalie Joseph McSorely, who repelled 15 Laker shots, including several tough one-on-one challenges.

Boys’ Latin never led in the contest, but the teams were never separated by more than three goals in the first half. Leading 4-2 at the end of the first quarter, Kelly struck for his first goal of the game, just 57 seconds into the second stanza, to push the Cardinals in front by three. Shilling responded with an unassisted extra-man score, 12 seconds later. The Cards’ lead grew to three again with an unassisted tally by Kelly, with 8:58 remaining in the first half, but BL struck back quickly with another extra-man goal, with Shewell converting a feed from Shilling. 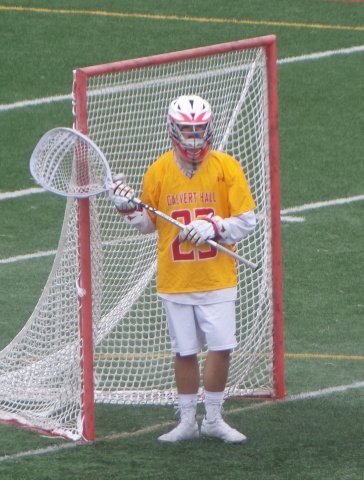 “Coming in we were just told to change plaines and as the game went on, he started saving low, and the coaches told us to change it up and shoot high and it started to fall,” said Brown in explaining why the Cardinals targeted so many of their shots to the upper half of the goal.

The teams split four more goals in the quarter as Calvert Hall took an 8-6 advantage to the break. Kelly fed Bugliosi for the Cardinals’ seventh goal and later completed a second quarter hat-trick as Brown assisted. In between, Spencer had an unassisted goal for the Lakers and then assisted Brendan Mullally.

Again, the teams traded goals early in the third quarter, but Calvert Hall did go on a three goal run to open a 13-9 advantage with 4:06 to go in the quarter.  Shewell, however, tightened things again with the final two goals of the quarter.

“We switched up what we were doing. We have a good action,” said Timmy Kelly of his squad’s third-quarter surge. “We did that the first half and, in the third quarter, Jason and I actually came together and said we need to run this one play. I fed (him) on two up there and I scored a goal. It was just working really well.”

Although he knows a lot of work still must be done, Coach Kelly was thrilled to get the league opener.

“This is a new season and we’re 1-0. That’s what we told the kids. The preseason is over,” said Kelly, who discussed the difficulty every team faces game-in-and-game-out in the MIAA. “Every game is like this. No matter who you are playing, every game is a barn-burner and going to be tight. Hopefully, we can improve and get better from today.”

Boys’ Latin coach Bobby Shriver, who captured his 500th career victory in his last outing was pleased with the way his club battled.

“We showed a lot of spunk. We never had a lead. We were tied and kept fighting back, so if we can keep fighting like that the rest of the year, hopefully we can be OK,” said Shriver. “The conference is tough. We’re playing on the road in our first league game, that’s what it is.”

Curley strikes back against No. 1 Calvert Hall

Delp pitches Calvert Hall back into a share of first place