A pair of tired pitching staffs waged a gutty battle in the final game of a long double-elimination tournament, Monday evening at Ripken Stadium, where hits and runs were hard to come by.  Top-seeded Calvert Hall, however, found a way to manufacture four runs in the bottom of the fifth inning to rally past Gilman and claim a 4-2 victory, completing a two game sweep of the Greyhounds in the MIAA A Conference Baseball Tournament finals.

Ben Deaver, Calvert Hall’s third pitcher of the game, tossed two perfect innings of relief to earn the save, finishing off the victory which earned the Cardinals their second consecutive league title and their seventh in the last nine years.  It was also the second consecutive year that the Cardinals had to win twice in the finals to capture a championship. 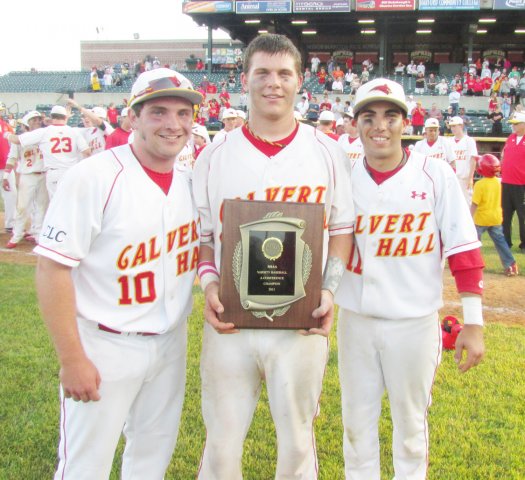 According to Calvert Hall coach Lou Eckerl, the plan was to pitch by committee from the outset.

“We were hoping to get three or four innings out of Nick (Delp), and then go to our bullpen,” said Eckerl.  “I’m especially proud of our pitching staff, coming in and splitting up the game enough to where we had Ben Deaver in to close.”

Filled with big bats, the Calvert Hall lineup utilized a wild pitch, a pair of fielder’s choice plays and a sac-fly to chase home their four runs.

Brothers Richard and Manny Rodriguez, who starred in Calvert Hall’s 7-0 win on Sunday night, ignited the decisive rally Monday.  Richard reached base on an infield error to start the inning and Manny followed with a base hit.  Troy Stokes then drew a walk which chased Gilman starter Ben Grace from the mound with the bases loaded and no outs.

Senior left-hander Paul Smeton came on in relief and surrendered Calvert Hall’s first run with a wild pitch, which chased home Richard Rodriguez.  Zach Rowe was up next and he hit a grounder to second which was fielded by Gilman’s Trevor Wey.  Wey threw home, but he was not in time to get Manny Rodriguez, who slid in with the tying run.  With first base now open, Smeton pitched carefully to slugger Alex Murphy and eventually walked him to re-load the bases.  Another fielder’s choice grounder, off the bat of Robbie Jones, went to Grace at short, but he fired high to the plate, allowing Stokes to slide in safely with Calvert Hall’s third run.  Rob Farley then plated the fourth run with a sac-fly.

Coming off a one-hit shutout of Archbishop Curley on Friday, Delp, a sophomore, made the start for Calvert Hall on short rest and gave his team three tough innings, allowing just one unearned run.

Gilman (24-12) jumped up 1-0 in the second when Wey reached second on a two-base error and came home on a line single by Matt Slodzinski.  The Greyhounds made it 2-0 in the fourth.  Senior Jason King hit a leadoff triple down the right-field line and was again plated by Slodzinski, who hit a sac-fly.  The run was allowed by Calvert Hall’s Matt Boyd, who came on to pitch the fourth and fifth innings, and was ultimately the winning pitcher.

Gilman out-hit Calvert Hall, 6-3, in the contest with Grace and John Fitzgerald having two hits each for the Greyhounds.  Grace pitched well early, but suffered the loss.  He allowed just one hit, but walked four and was hurt by the error leading off the the Calvert Hall fifth.

Deaver said he was extremely happy, especially for the seniors. “We had to come back and I knew we had to come out strong today.”

Battery mate Alex Murphy said his team seized the moment.  “When we had the bases loaded with no outs, that was our opportunity.  It’s a spectacular feeling. Deaver did a fantastic job. He came in, and did what he had to do.”

It was the 27th MSA/MIAA baseball championship for Calvert Hall, 18 of which have come in the past 29 years.

The Cardinals finished the season 24-8.

10 Years of Excellence: VSN’s No. 3 Defensive Back of the Decade

Sophomores lead No. 4 McDonogh boys soccer past No. 3 Gaels

Loyola turns close battle with Gilman into second half rout