Calvert Hall edges No. 4 John Carroll, in a tight one

On a night when neither team got on track offensively, No. 2 Calvert Hall College battled past No. 4 John Carrol School, 43-40, in a tight MIAA A Conference/Baltimore Catholic basketball battle in Towson.

The Cardinals, who gained a regular season split with the Patriots, outscored JC 10-4 over the first half of the final quarter to gain a 40-34 advantage, the biggest lead of the night by either team, and hung on for the win.

The victory allowed the Cardinals (23-5 overall) to finish its MIAA schedule at 14-4 and clinch no worse than second place in the league, which means they will have a first round bye in the playoffs. The Cardinals trail Mount Carmel (14-3), which defeated Mount St. Joseph, 54-52, Wednesday, by a half game. The Cougars can lock up the top seed with a win against Glenelg Country on Thursday.

Calvert Hall closes its regular season on Friday in Hagerstown against St. Maria Goretti in a BCL contest. In the BCL, Calvert Hall and John Carroll are tied for first, each with 12-3 league records. John Carroll (23-5 overall) closes its regular season on Friday against Archbishop Spalding. Mount Carmel, which is through with its BCL slate, is 10-4 and in third place in the Catholic League. In addition, John Carroll is 12-5 in the MIAA where it will finish third regardless of what happens on Friday.

Nico Clareth, who finished with a team-high 13 points, six rebounds and three assists, converted three free throws and had a field goal in the surge, in addition to a blocked shot, two rebounds and a steal in the critical thee minute span.

“You just have to pull it out. You have to dig deep, no matter how tired you are,” said Clareth of the defensive effort in the final quarter. “Coach said we’ve got to get defensive stops and that’s what I was willing to do. I wasn’t getting that many points on the board, but I was trying to do other things.”

John Carroll’s Kimbal Mackenzie, who led all scorers with 15 points, tried to rally his squad with six fourth quarter points, but the Cardinals survived despite missing four consecutive free throws in the final one minute, 13 seconds. Senior Reggie Rouse broke the draught by converting the second of two attempts, with just four seconds remaining. The Patriots got off a desperation three-point heave at the buzzer but it went over the backboard as time expired.

John Carroll led 25-23 at the half and the two teams combined for just 14 fourth quarter points, with the Cardinals outscoring the Pats by two to tie the game, 31-31, at the end of three quarters.

Evan Phoenix (six rebounds), who did his best work in this one on the glass and the defensive end of the court, scored six of his eight points in the third quarter.

“Defensively, that was our best thing today,” said Phoenix. “Our defensive presence was amazing and I think that forced us to get easy buckets in transitions.”

John Carroll’s big Mike Tertsea had a big first half, scoring all 10 of his points before intermission, including a rim-rocking slam off a perfect feed on an inbounds play. John Carroll’s biggest lead was 10-6 late in the first quarter, but in the final minute of the period, Calvert Hall got a basket from Kenji Bahar and a three-point jumper from Clareth to grab an 11-10 lead at the first break.

Kimbal scored seven points in the second quarter to push John Carroll back in front and the Patriots led 25-23 as the teams went to the half.

Prior to the game, Calvert Hall honored six seniors, including Clareth, who spoke to the crowd from the court, announcing his decision to commit to Sienna University for his college basketball career.

“This is one of the biggest decisions you ever make in your life, going to a college. I just want to say I’m blessed to go to a Division 1 school. Not too many people have that opportunity and I just felt like it was right for me,” said Clareth of his decision to play for former Loyola University head coach Jimmy Patsos.

Drew Edwards scored seven first half points for the Cardinals, but was plagued by cramps in the second half, and finished with nine points.

“A great effort defensively, I thought, from the mid third quarter on. We played some really good defense, forcing them into as many difficult shots as we could,” said Bauersfeld. “It was good hard nose game and I am really happy with our defensive effort.”

John Carroll head coach Tony Martin said his team missed an opportunity to take command in the third quarter and that may have been the difference.

“There was a spurt there, relatively midway through the third quarter that we had a four point lead, but we just came up empty on three or four offensive possessions in a row,” said Martin. “I thought we could create separation and been up eight, nine. It would have been a huge difference. Then we got a little mental fatigue and did not defend as well as we normally do.” 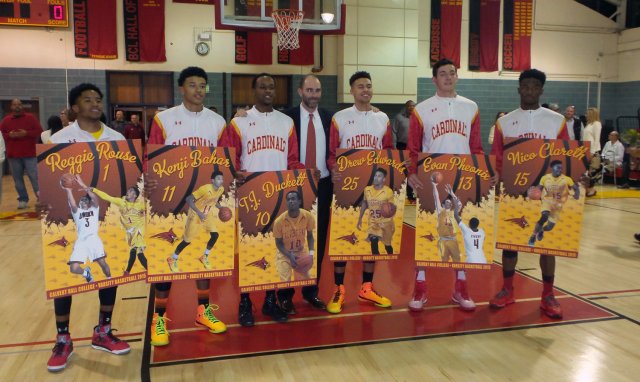 Mathis and Quickley combine for 57

No. 4 Curley and No. 9 C. Milton Wright play a scoreless draw