No. 1 Cardinals advance to Navy for Tuesday’s semifinals against St. Mary’s 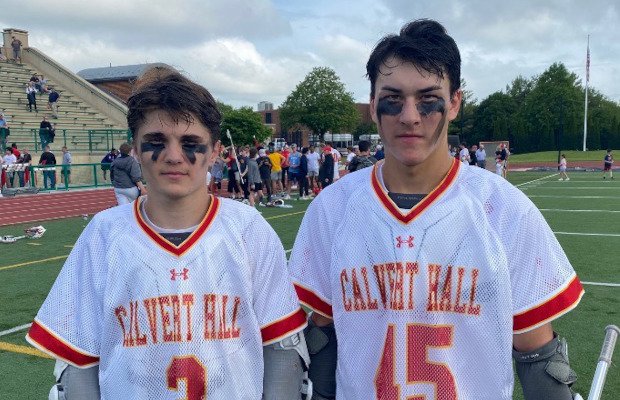 Seniors Truitt Sunderland (left) and Jordan Wray have been major catalysts in No. 1 Calvert Hall’s run to the MIAA A Conference lacrosse semifinals. They combined for five goals in Friday’s quarterfinal win over Severn School in Towson.

Junior midfielder Davis Provost, showing increased confidence, led top-ranked Calvert Hall College with four goals, and University of Virginia-bound senior attackman Truitt Sunderland added three of his own to lead the Cardinals to a 12-9 victory over a young, talented, and resilient Severn squad Friday afternoon in Towson, in the MIAA A Conference lacrosse quarterfinals.

The victory puts the Cardinals, the No. 3 seed, back in the A semifinals, as they will travel to Navy-Marine Corps Stadium on Tuesday at 7:30 p.m. to face 2nd-seeded and fourth-ranked St. Mary’s for a spot in next Friday’s final in Annapolis.

Just like last week’s regular-season matchup between these two, Calvert Hall started fast, jumping out to a 3-0 first quarter lead behind two goals from Provost and one from senior midfielder Jordan Wray (Georgetown). Unlike last week, the Admirals responded.

Outscoring Calvert Hall 4-1 in the second quarter, the Admirals had momentum, confidence, and the ball with 38 seconds remaining. Their hopes of a halftime lead vanished when Calvert Hall senior longstick midfielder Luke McAuliffe (Lehigh) helped cause a turnover, scooped up the loose ball, and sprinted upfield. The speedy McAuliffe found Sunderland near the crease, and the reliable senior deposited a gut punch at the horn.

But the Admirals hung tough, and sophomore middie Andrew Beard cashed in twice to cut the deficit to 8-6 late in the third. Once again Sunderland had the timely answer, as he rifled home a high-to-high dart giving the Cardinals a 9-6 lead with six seconds left in the quarter.

Wray says that the Cardinals have hit their stride at the right time.

“I think one thing we have learned as a team, is to compete through everything. That’s one area where we have grown a lot. Killer instinct, we’re going to the goal and not stopping.”

Sunderland agreed and spoke about his team’s senior leadership.

“It’s a big senior class, and we’re super close. We want to win. Everyone has completely bought in. It took us a while to figure out how much hard work it takes. We’re all-in now. We’re ready for Tuesday.”

Emotions were running high in the Severn post-game senior huddle. Admirals coach Joe Christi was thankful for his seniors.

“We have six seniors and they have been phenomenal. I’m proud of our leaders, proud of our seniors. When your group is good, your group is strong, you can do a lot of things,” said Christie. “We had a freshman and a slew of sophomores and juniors playing massive roles for us, so we’re excited to get back to work.”