Brant Hall’s last game as the coach at Loyola Blakefield did not work out well for him, yet his Dons threw a brief scare into archival Calvert Hall College before bowing, 40-21, in the 97th Turkey Bowl at M&T Bank Stadium on Thursday morning.

An emotional Hall, who hugged many of his player after the Dons’ seventh loss in the last eight years to the 12th-ranked Cardinals, told his team “this has to stop” in his postgame remarks.

“I’m proud of our guys,” he said. “We played a good football team, but I really wanted this for our seniors.”

The Cardinals, though, enjoyed banner days from senior quarterback Ben Brooks, junior wideout Chris Cooper and bruising offensive and defensive lines to bolt to a 33-7 lead and then hold off their cross-Towson foes.

“We came out in our base defense and played downhill football,” said Calvert Hall senior linebacker Tyshon Fogg, a Rutgers University commit, said after the Cardinals’ third straight win in the series that Loyola still leads 49-40-8. “And Ben came out dealing the ball. It was a great accomplishment.”

Like last year when Calvert Hall (7-5 overall, 2-4 Maryland Interscholastic Athletic Association A Conference) scored on a long run by B.J. Watson on its first possession of a 6-0 victory, the Cardinals struck early again.

This time, it was a 57-yard pass from Brooks to junior Cooper just over two minutes into the game to give the Cardinals a 6-0 advantage.

After an interception by Calvert Hall junior linebacker Jordan McLaughlin, Calvert Hall drove 75 yards in 10 plays to build a 12-0 cushion on a Brooks’ 1-yard plunge.

Key plays in the drive were two passes from Brooks to junior Pierce Robinson for a combined 39 yards and Watson’s 20-yard bolt up the middle to the Dons’ 1-yard line.

The Cardinals then took advantage of a bad punt to put together a nine-play 36-yard drive that Watson capped with a 1-yard run behind 375-pound junior Alphonso Cornish.

Loyola (5-6, 0-6 MIAA A) responded after an electrifying 55-yard kickoff return by freshman wideout Ty Trinh to the Cardinal 21-yard line.

Three plays later, junior quarterback Will Koras’ 5-yard swing pass to senior wideout Kenny Lewis put the Dons on the scoreboard with just over three minutes remaining in the first half. 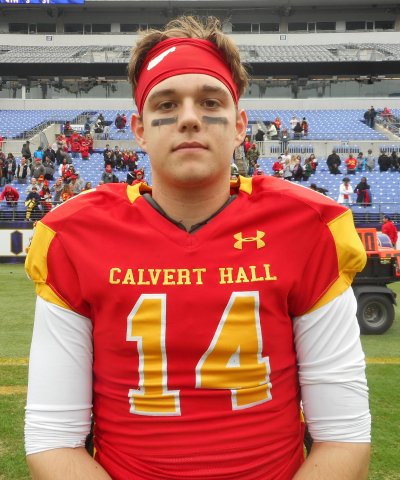 The Cardinals picked up where they left off in the third quarter after going to the Wildcat with Watson taking direct snaps. On the second play of the series he handed off to Cooper, who cut inside and then bolted 43 yards for a touchdown to go ahead, 26-7.

They increased the margin on the next drive with Brooks connecting for 25 yards to junior wideout Xavier Gravette on third-and-12 and then threading the needle on a 19-yard pass to Cooper at the Loyola 2.

Loyola’s answer was a 37-yard drive that Koras finished on a 5-yard scramble to slice the deficit to 33-14 with under a minute remaining in the third quarter.

Lewis, playing defensive back, picked off Brooks for the second time with just over nine minutes left in the fourth period and the Dons took advantage when Koras found senior fullback John Feola on a 6-yard pass to further decrease the difference to 33-21 midway through the final period.

McLaughlin’s runback of the ensuing onsides kick to the Loyola 30 helped the Cardinals chew up some clock in an attempt to hold off the hard-charging Dons.

Brooks then found sophomore tight end Pete Marchineck down the seam on a 4th-and-6 to set up McLaughlin’s 4-yard touchdown run with just over four minutes to go.

Strong defensive effort not enough for No. 8 McDonogh