Although it started slowly, Calvert Hall produced a first-rate third quarter Saturday afternoon at sweltering Paul Angelo Russo Stadium in Towson to rip St. Mary’s-Ryken, 34-18, in the football opener for both schools.

The Knights, who play in the rugged Washington Catholic Athletic Conference (WCAC), more than held their own in the first half until the Cardinals put up 27 points in the third period to win going away.

“They were extremely well prepared,” said Calvert Hall coach Donald Davis about his St. Mary’s-Ryken counterpart Jerry Franks. “Jerry Franks has something like, I don’t know, 200 plus wins. I knew his team was going to be ready to play. He has a great staff and he’s got tough kids.”

Calvert Hall struck first after junior linebacker Chance Campbell forced a fumble on a sack of St. Mary’s quarterback Kristian Marks and senior end Anthony Rowe recovered for the Cardinals at the visitors’ 21-yard line early in the second quarter.

The Cardinals were poised to strike again after a 32-yard punt return by junior Chris Cooper brought the ball to the St. Mary’s 47.

Senior fullback Tim Smith then bullied his way to the enemy 25 on a couple of runs before the drive fizzled.

Ryken responded by spreading the field with Marks playing pitch-and-catch with wideout Hopeton Mair on a couple of flanker screens to set up shop inside Calvert Hall territory.

On a third-and-14 from the Cardinals’ 46, Marks hesitated just long enough in a collapsing pocket to toss an inside screen pass to Isaiah Randolph, who had only one defender ahead of him as he motored down the left sideline.

One cross-field cut later, Randolph streaked into the end zone with Calvert Hall defenders in close pursuit. Camden Murphy’s point-after deadlocked the score with two minutes, 26 seconds remaining in the half.

Calvert Hall spurted ahead, 14-7, early in the third quarter when Brooks’ nifty ball fake drew the defense in and allowed Gravette to spring free again. Brooks hit him in stride on a 42-yard touchdown play.

“It was a run-play design,” Gravette said. “There were multiple options, pass or run. The quarterback made a great read, and it was a great throw by Ben Brooks.”

After a long kickoff return to the Calvert Hall 14 gave St. Mary’s a chance to draw even, the defense held when junior Isaiah Watson knocked down a pass near the goal line.

Calvert Hall countered quickly when Harvard-bound senior halfback B.J. Watson returned the ensuing kickoff 75 yards for a touchdown to break the game open for the Cardinals, who led 21-10. 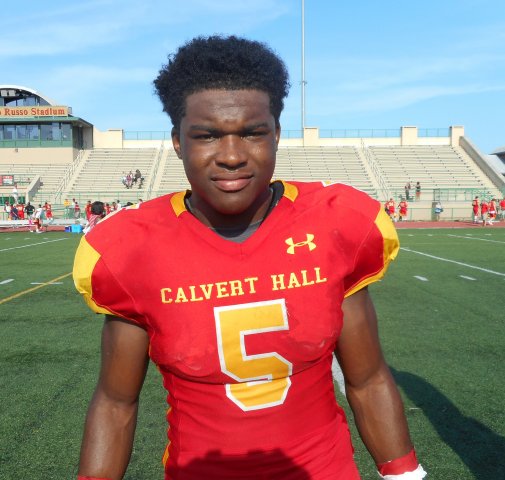 Watson credited his teammates for their blocking — especially senior Owen Reese — during the return. To be sure, Watson helped his own cause by breaking several tackles during the jaunt.

“He put it out of reach,” the veteran coach of the Knights said. “I think our kids might have dropped their heads a little bit after that.”

Reese’s 1-yard plunge and a 34-yard strike from Brooks to senior wideout Kam Brooks gave Calvert Hall two more touchdowns and a commanding 34-10 advantage by the end of the third period.

“The play-fake on our zone-run really brought the defense up,” Ben Brooks said. “And the O-line did great. They had my back today.”

After a scoring drought of nearly 32 minutes, running back Rashard Jackson’s 3-yard run with just over two minutes left in the game gave the Knights some consolation while making the score 34-18.

Loyola turns close battle with Gilman into second half rout