Junior forward Evan Phoenix scored 10 third quarter points to help Calvert Hall (28-5) emerge from a first half struggle with John Carroll (25-15) and go on to a 59-47 victory.

Phoenix, who finished with a game-high 16 points, had a pair of three-point plays in his third quarter surge as the Cardinals went from a 25-23 deficit to a 41-36 lead.

With John Carroll up 30-27, Phoenix converted consecutive “and one” plays and only a missed free throw attempt prevented him from having a third, as the Cardinals surged in front, 33-30.  Jordan Martin, who scored a game-high 14 points for the Patriots, had an “and one” of his own to tie the contest, at 33, but the Cardinals outscored the Pats 8-2 over the remainder of the quarter to go on top, 41-35.

“In the third quarter I was feeling good.  My teammates gave me the ball; I had open opportunities and I made the shots,” said the 6-foot-8 junior.  “I’ve got to thank my guards, like Sean Mayberry.  He got me open a lot and good screens were set.”

The teams traded scores over the first half of the fourth quarter, but the Pats never got closer than five points, before the Cardinals finished off the contest with an 8-3 run.  The Cardinals went 15-for-16 from the free throw line in the fourth.

John Carroll led most of the first half, but never by more than five, which it did twice in the second quarter.

Nico Clareth kept the Cardinals close with eight first half points and finished with 14, while Drew Edwards was 5-of-6 from the free throw line in the fourth quarter to finish with 12 points.

Kimbal Mackenzie had 13 points for John Carroll and Elijah Long netted seven for the Pats.

In the second game, outside of a short spurt in the third quarter, St. Joe dominated St. Frances in an 88-59 rout. 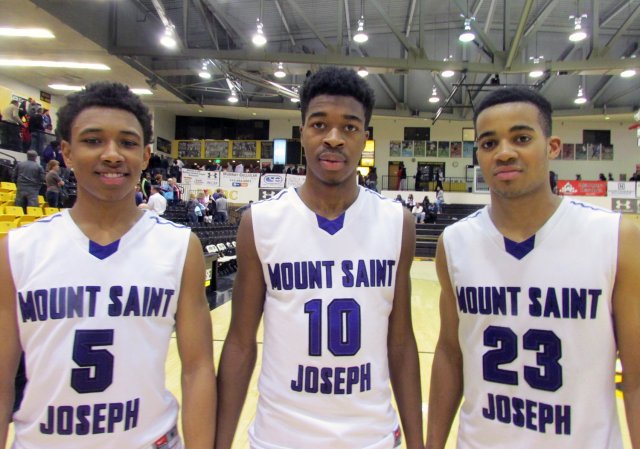 St. Frances (25-13) evened things out a bit in the second quarter and then scored the first six points of the third quarter to suddenly pull within six points of the Gaels, at 35-29.  St. Joe, however, had another big run of their own, outscoring the Panthers 22-7 to lead 57-36 after three quarters.

Jaylen Adams then capped a sensational shooting performance with three fourth quarter three-pointers. McNeil had six three-pointers in the contest and a game-high 28 points, in addition to running the Gael offense and playing tough, aggressive defense.

Adams had a lot of help from two senior running mates, as Jordan McNeil finished with 20 points and Phil Booth collected 15.

“It felt real good.  It felt great,” said Adams.  “Earlier this week it hit us that this was our last time we were going to play here in the BCL Tournament, so me, Jordan and Phil played as hard as we could and we got one more left.”

Will Robinson led St. Frances with 14 points and Duane Morgan battled his way to 13 points.  In addition, Khalil Richards scored 10 for the Panthers and Josh Ayemi finished with nine.

Monday’s final, which tips at 7:00 p.m. at UMBC, figures to be a classic.  The two teams split their regular season meetings, with St. Joe winning at Calvert Hall in overtime, in December, and Calvert Hall edging the Gaels by three points in Irvington, in January.