Entering the playoffs as the fourth seed, Calvert Hall’s varsity golf team completed a surprising post-season run, Saturday at Caves Valley Country Club, with a 12.5-8.5 win over second-seeded Gilman in the MIAA A Conference team championship match.  Also on Saturday at Caves, Severn defeated Saints Peter & Paul for the B Conference championship.

Saturday’s outcome reversed a five point loss the Cardinals suffered at the hands of the Greyhounds during the regular season.  Calvert Hall also scored a decisive 14-7 win over top-seeded Mount St. Joseph, in the semifinals, after losing to the Gaels by 12 points in April.

“The heart and determination that my Calvert Hall players showed throughout the season and the playoffs was truly special.  We just picked the right time to play our best golf of the last two months,” said Calvert Hall coach Drew Forrester, in his first season with Cardinals after two seasons as head coach at John Carroll.  “When you beat three outstanding programs like McDonogh, Mount St. Joe and Gilman over a five-day stretch, you know you’re doing something right.  It’s been 16 years since Calvert Hall won a golf championship.  This one will be remembered by our players and their parents for a lot longer than that.”

In Saturday’s first grouping, the Cardinals and Greyhounds split seven points.  Gilman’s Will Rosenfeld took 2.5 of a possible 3 points from Jimmy Green, but Cardinal Grant Burton did the same thing to his opponent, Kevin Devine.  Both schools split the team point from that grouping.

The second grouping provided the Cardinals with an edge that ultimately proved decisive.

In the final grouping, Gilman’s Edward Owen won three points from Matt Muddiman, while Ryan Howard of the Cardinals took a 2-1 edge over Gilman’s Charles Young.  Calvert Hall also won the team point in this grouping.

Calvert Hall won the very first MIAA A Conference golf championship in 1996 and repeated in 1997, but has not taken the title since then.

“Our hats go off to the young men at Gilman for a terrific season and a spirited effort in the championship match,” said  Forrester.  “As I said to Don Rogers and his players afterwards, they have nothing at all to be ashamed of.”

In the B Conference, Severn won its fifth league title and its first since 2005 with a 13-8 victory over Saints Peter & Paul.

In the first grouping, the Admirals claimed five points, as Eric Hall and Jamie Soderlund each won two and captured the team point.

Christian Lisle halved his match in the second grouping to bring the Admirals another 1.5 points.  And in the final group Collin Flynn and Stephen Paulini took 6.5 points, including the team point.  Matt Claycomb was also part of the winning lineup for the Admirals.

According to first year Severn coach Chris McBee, the Admirals improved throughout the season.

“They fought hard all year,” said McBee.  “The lineup stayed the same and continued to improve and I am very proud them.” 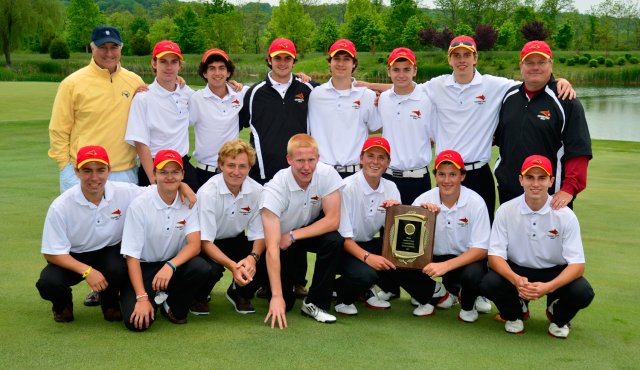