by Joe DiBlasi
Coming off a stunning overtime loss on Friday night at Boys’ Latin School, No. 5 Mount St. Joseph bounced back on Sunday afternoon in Irvington, as the Gaels rolled to an 89-62 win over John Carroll School in MIAA A Conference/Baltimore Catholic League basketball action.
George Washington University-bound Tyler Brelsford finished with 24 points for the Gaels, who improved to 11-3 overall and 4-2 in the MIAA A and BCL). It was the first league loss of the young season in both the A Conference and the Catholic League for the Patriots (10-3, 3-1 MIAA and BCL).
John Carroll started fast, grabbing an 8-4 lead in the first three minutes of play on two three-pointers from sophomore Tyson Commander and a deuce from Cesar Tchilombo. The Gaels’ Cam Sapienza responded with two treys of his own and Jason Edokpayi made a reverse layup to give the Mount a 12-9 lead, at the two minute, 41 second mark in the first quarter. 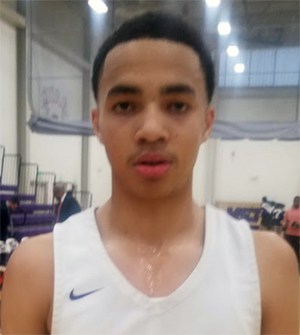 Tyler Brelsford scored 24 points to help Mount St. Joseph bounce back from a tough loss with a big win over No. 12 John Carroll.

The Gaels never looked back,  ending the quarter with a 16-14 lead which they extended to 40-35 at the half, and after exploding for 32 points in the third stanza, it was cruise control the rest of the way.
Ten different players scored for the Gaels, led by Brelsford, who had back-to-back dunks at the six-minute mark in the third quarter, propelling the Mount to a 56-38 lead.
Edokpayi (16), Sapienza (13), and Ausar Crawley (13) hit double-digits for longtime Gaels coach Pat Clatchey.
“John Carroll has some really good shooters,” said Clatchey, the dean of conference coaches, who’s in his 28th year at the Mount.
“We’ve been working on making stops and not fouling and it helped us today when they got in some foul trouble, and we started attacking them with some high-low stuff.
“Our guards played well today and our bench did a good job. Jason (Edokpayi) made some big plays in the third quarter and Tyler Brelsford played really well. He’s a senior now, and he has a lot of veteran experience. We need for him to step up on both ends of the floor for us to be good.”
Clatchey has guided MSJ to 23 MIAA/BCL championships since 2003. Sunday’s win was number 676 in his illustrious career.
For his part, Brelsford said, “Coach told us at halftime that we had to come out and make defensive stops, and that’s what we did. Our defense wins games, and that’s what helped us get out to that big lead in the third quarter. We bounced back after Friday’s tough loss, and we made a lot of stops today, scored in transition, played together and got everybody involved.”
John Carroll’s Tyson Commander lead all scorers with 27 points, which included four treys, and an impressive 11-for-14 (78.5-percent) shooting from the free-throw line.
Junior Jalen Bryant added 11 points for the Pats.
NO. 5 MOUNT ST. JOSEPH 89, NO. 12 JOHN CARROLL 62
JC 14 21 17 11 — 62
MSJ 16 24 32 17 — 89
JOHN CARROLL: Bryant 11, Jakubowski 6, Tchilombo 5, Vaughn 1. Commander 27, Long 6, Basima 7.
MOUNT ST. JOSEPH: Crawley 13, Brelsford 24, Hanlon 6, Edokpayi 16, Carr 6, Stines 5, Sapienza 13, Chairs 2, Zelinski 1, Moutome 3.