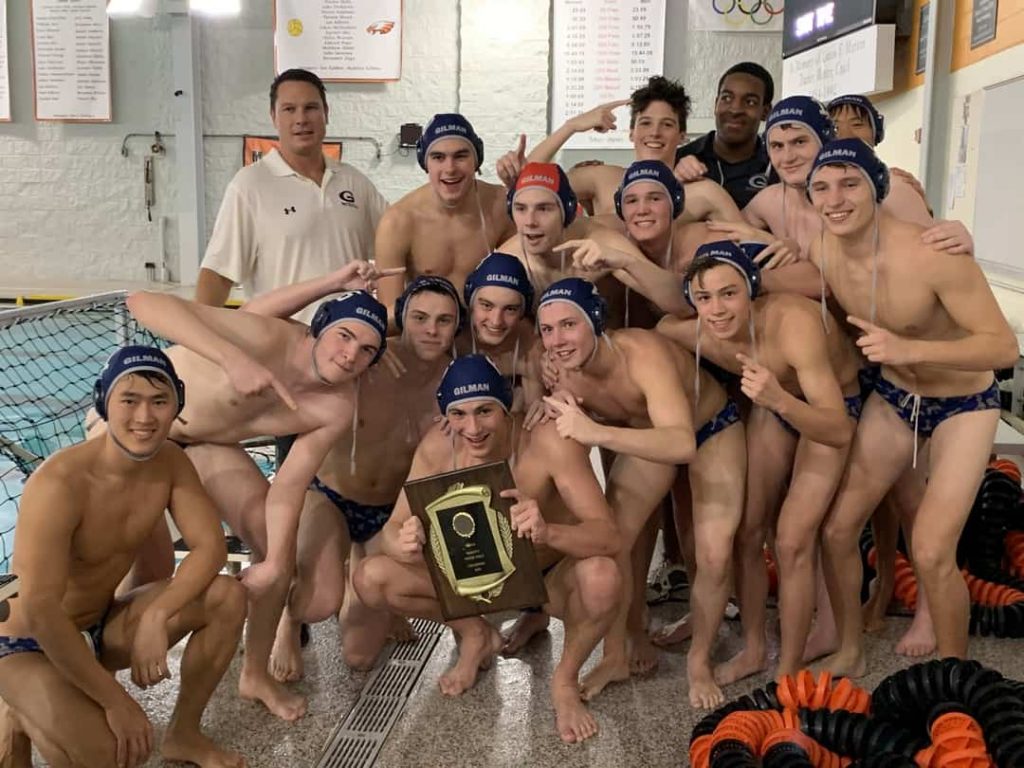 Five years ago, a handful of Gilman School lower schoolers started playing water polo. Their work and dedication were realized Saturday.
The Greyhounds won the MIAA water polo title with a 21-8 victory over Mount St. Joseph at McDonogh’s Rosenburg Aquatic Center. Senior Brooks Lebow finished with 4 goals and 2 assists for the Greyhounds (16-2 overall), and Adam Masom and Philip Morgan each finished with 4 goals.
The Roland Park school never trailed after the match’s opening tally, completing a perfect run through the MIAA water polo league. Only Calvert Hall College, Loyola Blakefield and McDonogh had won the championship (since 2004) until Saturday.
The title road for Gilman started in 2014 when then-7th graders Hollis Quasebarth, Sal Ricci, Bodie Breza, Masom, Lebow, and Justin Bai started playing.
“As we rose through the system, more and more people trying out and the program was built,” said Masom.
“They brought in and this is the result,” said Greyhounds coach Vaughan Smith. “Obviously, I got a handful of other seniors who picked the game up…This sport sells itself.”
Last year, Gilman lost to Loyola in the title game, setting the stage for a season of dominance. The Greyhounds won 8 of their 10 regular season game by double-digits, including a 15-goal decision over Loyola.
After beating the Dons in the semifinals Friday, Gilman had one last obstacle in Mount St. Joseph Saturday.
There was no letdown. Mount St. Joseph scored first, but Gilman accounted for 8 of the next 10 goals.
“We developed an amazing chemistry playing together so long. We came in today ready knowing that first goal didn’t phased us. We stressed playing four quarters all year.”
Mount St. Joseph itched to within 4 at 11-7, but junior Antonio Mendez-Trendler’s behind-the-back tally and Bennett Speicher’s goal put Gilman up, 13-7, at halftime. Masom’s goal with 2 seconds left on the shot clock started a closing 7-goal run.
Mendez-Trendler finished with 3 goals and an assist, and junior Ian Raley had 2 goals and 2 assists. Hunter Smith finished with 5 goals and an assist for Mount St. Joseph, which lost to Gilman, 16-11, in the teams’ last meeting a couple of weeks ago.
The Greyhounds’ experience and bond wasn’t to be denied Saturday.
“We’ve grown up together and playing this sport, I think of them as my brothers,” said Quasebarth. “It’s pretty amazing after getting destroyed by Loyola, and pulling it out this year. It’s pretty great.”