The football played in the MIAA B Conference over the last three weeks has been heart-stopping and filled with exciting games with stunning finishes.

The trend held true again on Friday, as St. Paul’s visited Boys’ Latin in the latest renewal of their historic series and the host Lakers held off the two-time defending champion Crusaders, 35-34, in overtime.

St. Paul’s (5-3, 3-2) still leads the overall series 40-20-1 and, more importantly, the Crusaders remain alive in the chase for one of the two spots in next week’s league championship game, despite the loss.  Boys’ Latin (6-3, 3-2), however, was eliminated, based on the league’s tie-breaking criteria.  St. Paul’s now awaits the outcome of Saturday’s John Carroll/Archbishop Curley game to find out if it will get a shot at a third consecutive title. 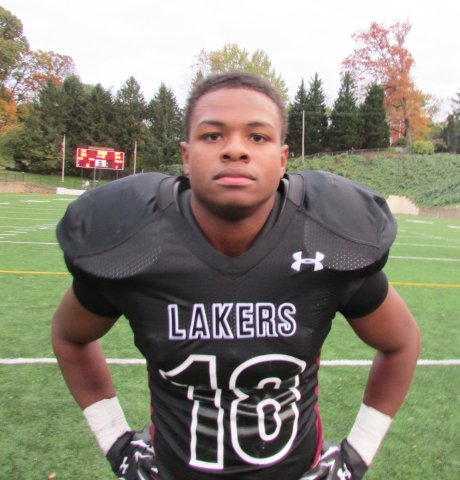 This game came down to a two-point conversion attempt in overtime.  BL had the ball first in overtime and scored on a 19-yard touchdown pass from Logan Wisnauskas to Gavin Callahan, which was followed by an extra-point kick by Dominic Maggio. The Crusaders passed on an opportunity to kick a conventual extra-point and send the game into a second round of overtime, shortly after senior quarterback Anthony Pino completed a 10-yard touchdown pass to Allan Koikoi.

On the two-point attempt, Pino rolled to his right and targeted Darius Johnson in the back of the end zone.  Johnson got his hands on the ball, but before he could control it, Boys’ Latin cornerback Marcus Cohen poked it loose to seal the win for the Lakers.

“I had no idea the ball was coming my way.  I just reacted at the last second and knocked it away,” said Cohen. “It all happened so fast and when I saw the ball hit the ground, I knew we had won.  This is just a tremendous feeling.”

Pino, who may have played the final game in his brilliant career wanted to go for the win, knowing a victory would assure a return trip to the championship game.

“They made a great play at the end of the game. I don’t regret going for two at all,” said Pino. “We’ve done that multiple times and won multiple games doing it. So I guess the luck ran out.”

There is nothing lucky about Pino.  He is hailed far and wide as one of the best quarterback’s in the state and he proved it again on Friday with a series of clutch throws.  The Crusader senior leader competed 21-of-35 pass attempts for 251 yards and two touchdowns.  He also rushed for two scores.

“Anthony Pino is a tremendous quarterback,” said Schell. “He’s unbelievable. It was a well fought game. It was a nail-biter.”

Boys’ Latin actually had a chance to win the game in regulation, but a 35-yard field goal attempt by Laker kicker Dominic Maggio sailed wide left as the clock expired.

The Boys’ Latin offense was powered by running back Stephon Hill and Wisnauskas.  Hill carried the ball 17 times and for 100 yards and two touchdowns, and he caught one pass for 25 yards and a score.

Wisnauskas completed 16-of-32 passes for 280 yards and two touchdowns.  He also rushed for a score.

BL trailed 21-7 as the fourth quarter got underway, but Hill scored from two yards out, on the first play of the final period, to pull Lakers within one score, at 21-14.

Following a Crusader punt, Boys’ Latin took advantage of great field position, as Hill burst through a big hole on BL’s left side and sprinted to the end zone for a 47-yard TD to tie the game at 21-21.

Freshman running back Mitch Daugherty pushed St. Paul’s back in front with a 6-yard touchdown run, but BL counteredwith a brilliant 7-yard scramble by Wisnauskas to knot the game at 28.

“Nobody leaves our games early.  Our league is so balanced and every game comes down to the final minutes,” said St. Paul’s head coach Paul Bernstorf. “It was a tough loss, but still a lot of fun to be a part of.”

One moment that was not fun came in the middle of the second period when St. Paul’s junior wide out Tyler Rockhill, one of the team’s biggest playmakers, was injured.  Rockhill was experiencing neck pain after a hard it and was transported to a local hospital.  The game was delayed nearly 40 minutes by the injury.

Not knowing if his team’s post-season hopes were still alive or not, Schell was still excited by Friday’s win.

“Whether we make it to the championship or not, this was awesome.”

In the end the clock has run out on the Lakers’ 2014 season.  At this point, both BL and St. Paul’s are tied for third in the B Conference with two losses each, while Archbishop Curley is 4-0 in the conference and John Carroll is 3-1.  If Curley, which has now clinched its place in the title game, defeats John Carroll on Saturday, the Patriots would fall into a three way tie for the second spot with the Lakers and Crusaders.

The first tie-breaker is head-to-head and since all three teams would be 1-1 in this scenario, the next tie-break is most points scored in your conference losses.  St. Paul’s has the edge on Boys’ Latin by the smallest of margins in this category, 48-47.

In its one league loss so far, John Carroll has scored 20 points.  Of course, the Patriots could earn their place in the title game with a win over Curley, but if they were to lose, they must score at least 29 points to advance, topping St. Paul’s total of 48.  If John Carroll scores exactly 28 in a loss, it would equal St. Paul’s, but the Crusaders would advance by virtue of their head-to-head victory over the Patriots.

Park stays undefeated on the pitch