Greg Pyke will go down as one of the more unusual two-way athletes at Boys’ Latin School. A standout football linemen, the 6-foot-6, 300-pounder has been a key member of the Lakers’ lacrosse team the last three years.

He wants to close with a flourish. Pyke got his last run off to a strong start, scoring two goals as No. 4 Boys’ Latin defeated No. 5 McDonogh School, 7-3, in a MIAA A Conference first round match at J. Duncan Smith Field.

The Lakers (14-6) ran off four unanswered goals in the third quarter to break a 2-2 halftime deadlock to gain a return trip to the semifinals at Unitas Stadium. Boys’ Latin, the No. 4 seed, will meet top-seed and No. 1 Calvert Hall College Tuesday at 6 p.m. The other semifinal will feature second-ranked and defending champ Gilman School against No. 3 Loyola Blakefield in the nightcap.

Last year, Boys’ Latin lost in overtime to the Greyhounds in one of the most memorable games in the history of the MSA A/MIAA A league. Gilman scored three man-down goals in the final 90 seconds to force overtime before eliminating the stunned Lakers.

It’s arguably the most bitter of a series of postseason disappointments for Pyke, who was part of the 2010 Lakers squad that was blitzed by St. Paul’s School in the second half of the MIAA A finals that year. With less than a month before he heads down to the University of Georgia for summer school and conditioning for the upcoming fall campaign with the Bulldogs’ football team, Pyke knows it’s now or never.

“I definitely want to win the championship in lacrosse, I haven’t won a championship in any sport,” said Pyke, who was part of the football team that lost MIAA B title games to Archbishop Spalding (2009) and last fall to Annapolis Area Christian School. “It’s the last chance for the other seniors.”

The Lakers are alive for another lacrosse game behind a spirited effort in the third. The Lake Avenue school won all five faceoffs in the period, helping to produce four goals in a seven-minute stretch.

“We just had to keep shooting, possessing the ball and play good defense,” said Bruno.

After capturing a groundball following a strip on the sidelines by Colin Heacock, O’Connor finished seconds later, putting a shot high right past McDonogh goalie Nick Doyle for a 3-2 lead. Bruno was able to beat his defender with a half-dodge, broke inside and converted from just outside the circle.

Pyke finished a pass from junior Michael Lynch (three assists), extending the Lakers’ advantage to 5-2 with 1:21 left in the third. Boys’ Latin won the ensuing faceoff with Bryan Lichtenauer, and Rees fired in a shot from 10 yards out.

“It was a good shot, but I got pretty lucky too,” said Pyke, the country’s biggest high school attackman.”We did the wheel, I got an open shot, got my hands free and luckily canned the shot.”

“I think he wants to hold off his football career for a couple of more days,” said Boys’ Latin coach Bob Shriver. “We came out and had the top two seeds [Calvert Hall and Loyola] and got behind the eight ball pretty quickly. We’ve really played well since.”

“We talked at halftime about one team getting breaks and whoever works the hardest was going to get them and they [Boys’ Latin] did that in the third quarter,” said McDonogh coach Andy Hilgartner, whose team was eliminated by the Lakers for their third straight postseason. “They weren’t really sliding and we couldn’t get them to rotate defensively. We weren’t dodging enough to draw good slides.” 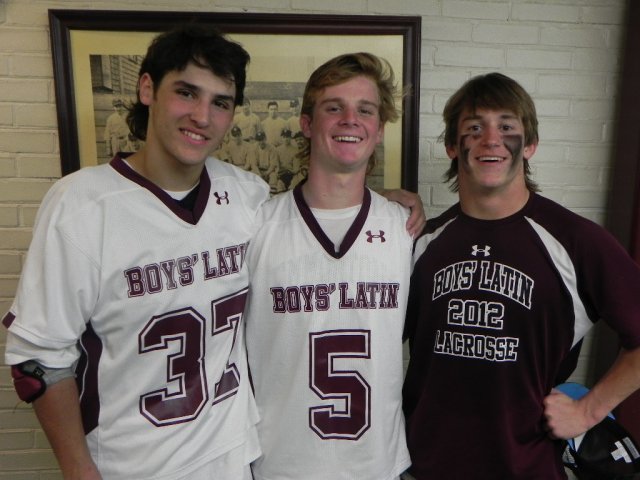 The Lakers next get Calvert Hall, which handled Boys’ Latin, 12-5, in the league opener last month, part of a four-game losing skid. They have won seven of eight (lost in overtime to Gilman) since.

“It’s going to take a superb effort against a great team, but we’re playing with house money,” said Shriver. “We can play loose and relaxed, but hopefully hard. All the heat is on Calvert Hall.”

MIAA A Conference Tournament first round

Lakers moving to the next level