For the first time in nearly a decade, the Boys’ Latin School Lakers are ice hockey champions. In a tension packed, up-tempo game, the Lakers were able to hold off St. Paul’s School, 3-2, for the MIAA B Conference championship in front of an electric crowd at Piney Orchard Friday night.

“It was our first time playing in front of a big crowd, they really pumped us up because St. Paul’s had a lot of big hits and we really fed off of our crowd,” said Laker junior Bryan Lichtenauer who had one goal and two assists.

“These guys stepped right from the beginning in November with the goal that they were going to do everything it took to win the championship,” said Boys’ Latin coach Jim Sandusky, whose team capped a 10-4-1 campaign. “It’s the culmination of commitment and maturity, and you can achieve if you do all right things.”

Tied at 2 with 9 minutes, 38 seconds left in regulation, Lichtenauer intercepted a St. Paul’s pass deep in their own and scored the game-winner goal on a breakaway. His tally clinched the Lake Avenue school’s first league title since claiming the B crown in 2002-03.

“We thought that if came out with the right attitude in the third period that one our guys would step up and Bryan did,” said Sandusky.

It didn’t take long for Boys’ Latin to get  going as junior Corey Koch found the back of the net at the 12:39 mark, with Lichtenauer and junior Maxx Lowenstein assisting. Three minutes later, St. Paul’s (5-11) drew even as senior Riley Meyer cashed in off of a face-off win in Laker terrority.

The Lakers regained the lead in the second quarter, thanks to Lichtenauer.  He found senior defenseman Brodie Pavo a few feet inside the blue line. Pavo slung the puck pass St. Paul goalie Whit Schweizer (18 saves).

“I think we played tremendously well, made a few mistakes,” said Sandusky. “I think we outplayed them up and down the ice, I give them [St. Paul’s] credit, they had a lot of effort.”

The Crusaders answered with Ned Moreland’s stick side goal, but the Brooklandville school averted disaster. With five minutes left, back-to-back St. Paul’s penalties gave the Lakers a 5-on-3 advantage. Boys’ Latin could not make St. Paul’s pay on multiple chances to even up the score.

“They whole time was just thinking I know that they’re not going to come a lot, but when they do they’re come hard,” said Laker junior goalie Danny Murphy (16 saves). “We did a job of controlling the puck and when they did get those two goals they came hard at the net.”

It was a fitting end between the rivals. Boys’ Latin claimed a pair of one-goal decisions during the regular season. 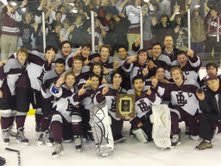 Friday, the third time was charm.

“We’ve been clicking all year and we came to the side and said let’s get it done and we did,” said Koch.