Boys’ Latin School’s basketball team viewed Saturday’s non-league basketball matchup with Ben Franklin-Masonsville as a barometer. The Lakers got the 2014 part of their schedule off to a promising start with a 72-52 non-league decision over the 18th-ranked Bayhawks on Lake Avenue.

The MIAA B Conference squad never trailed after constructing a 13-point first quarter cushion. After an 0-2 start, Boys’ Latin has won 10 of its last 12 decisions.

“We knew they were a Top 20 team so we had to step up offensively and defensively,” said Lakers senior guard Jordan Brooks, who scored 10 points.

The Lakers answered after Ben Franklin closed a 13-point deficit to 45-38 in the third quarter after a basket by Page. Spencer scored on the other end for the Lakers and followed another Bayhawk score with a quick spin move down the baseline for a basket.

Brandon Bradsher put Boys’ Latin back into double digits after the third, 51-41, with another jumper. Jordan Brooks opened the fourth with a running floater in transition and Kodye Pugh followed with a tough jumper in the paint, pushing the Lakers out comfortably, 55-41.

“We started playing a little bit more unselfish and when we starting moving the ball we started knocking more shots,” said Spencer, who scored 15 points in the second half.

Spencer and the Brooks brothers established their presence in the opening quarter, accounting for all but three points as the Lakers led 25-12. The Bayhawks chipped down the margin to 34-25 at halftime, but the Baltimore City squad was unable to slow down Boys’ Latin’s offense when needed.

“We were discombobulated with all the screens. We didn’t talk on defense,” said Bayhawks coach William Russell. “We let cutters cut in front of us, we didn’t box out again. Boys’ Latin played well and they played unselfish.”

The Lakers get another Top 20 test Monday evening when they visit No. 19 Severn School in a MIAA B Conference match. 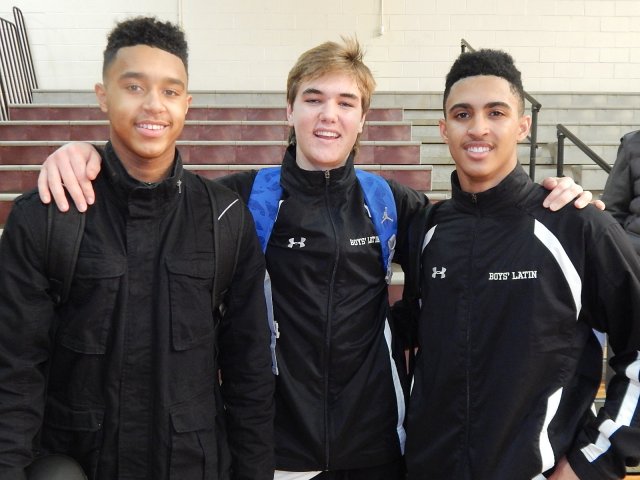 “We have to be mentally prepared for each game,” said Jordan Brooks. “We have to come out with intensity.”

Heubeck leads Gilman to another victory

Lacrosse must wait for Barthelme