No. 3 Calvert Hall wallopped five home runs on Tuesday afternoon in Irvington, enroute to a 13-2 MIAA A Conference win over No. 13 Mount Saint Joe in Irvington. 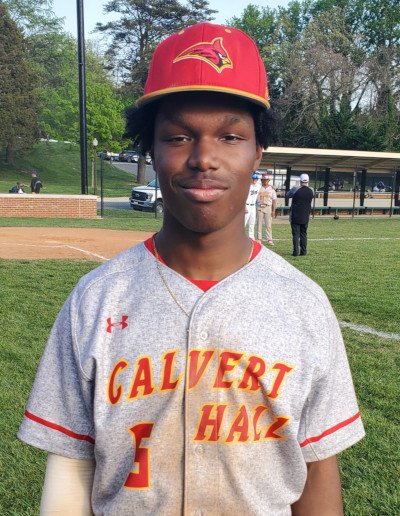 EJ Hankerson was 4-for-4 with two home runs, Tuesday, pacing the Cardinals in their 13-2 win in Irvington.

Junior EJ Hankerson led a 14-hit Cardinal attack against four St. Joe pitchers with a perfect 4-for-4 day at the plate, which featured two home runs, a double, a single, and walk, as well as five RBI, and three runs scored.

Catcher Lamar King, a Georgia Tech commit was 3-for-4 with homer, 2 singles and 2 RBI. King upped his team leading batting average to .455, while connecting for his 12th round-tripper of the season.

Jake Butler had a lead-off homer to start the game, and Hankerson smashed a 3-run blast to give a the Hall a quick 4-0 lead in the top of the first.

King and John Harris each connected for a pair two-run homers in the fourth, when the Cards scored six times.

“I’m seeing the ball really well lately, and I love playing with these guys, they give me a lot of energy,” said Hankerson. “We’re trying to get into playoffs for coach Lou and I think right now we’re hitting our stride.”

No need to worry about reaching the playoffs as the Cardinals (19-6 overall, 9-3 league) have already clinched their spot and need just one more win to lock up the second seed for the league’s double-elimination post-season extravaganza.

Lefty Pat Genco threw a five-hit complete game for Coach Eckerl, who announced his retirement at the start of the season.

“Lamar (King) called a great game behind the plate, as he always does,” said Genco. “Our defense was stellar, and all of my pitches were working, especially my change up.”

Eckerl said that his team played a complete game.

“This game was important, and the guys answered the call today,” said Eckerl. “This helps us in our bid for a bye in the conference playoffs. We can clinch a bye if we win at Curley on Thursday.”

Eckerl was touched by an unexpected tribute at the end of the game when about a dozen former players from his 1980 Cardinal Gibbons team (the first team that he coached on the high school level) congratulated him on his legendary career. The group included a few players from his first MSA championship, which he won with the Crusaders in 1982.

An emotional Eckerl said that he was humbled to see his former players outside of the Calvert Hall dugout.

“It means a lot to me to have such an outstanding group of former players from Gibbons show up to wish me well.”

Ripken Reese had a home run and a single for the Gaels (12-10, 4-8), who now find themselves tied for sixth with Gilman as they attempt reach the six-team tournament.

Top-ranked Archbishop Spalding spotted No. 9 Archbishop Curley a 1-0 lead, but limited the visiting Friars to just two hits over the final six innings as the Cavaliers battled back for a 5-1 victory, Tuesday in Severna Park.

The victory keeps Spalding (21-4 overall, 12-0 league) undefeated in the MIAA A Conference standings as they prepare to enter the post-season as the top-seed.

Caleb Estes had two hits, including a home run and drove in a pair of runs for Spalding. In addition, Bradeen Piotrowski went 3-for-3 with three runs scored, while Eddie Sargent tossed a complete-game three-hitter with nine strikeouts.

Curley’s only run came in the top of the first on a solo home run by catcher Zach Gaeta. The Friars fell to 15-11 overall and 7-5 in the league where they sit in third place.

Visiting Loyola scored three times in the top of the fourth inning to erase a 2-1 deficit and the Dons went on to defeat St. Mary’s, 7-4, Tuesday at Bestgate Park in Annapolis.

Dylan Bryan worked six innings for the Dons to get the win. He allowed all four runs, but struck out 10. Wyatt Mummert earned the save with a scoreless, hitless seventh inning.

Eric Chaney was 2-for-3 with a double and two runs scored for St. Mary’s.

Loyola (9-8 overall, 5-6 league) continues to rise in the MIAA A Conference standings. The Dons are currently in fourth place. St. Mary’s (8-12 overall) dropped to 2-10 in the conference.

Wyatt Randolf scored the winning run after leading off the seventh with a walk, moving to second on a sac bunt and scoring on an infield error.

Trailing 7-5 the Greyhounds got even in the sixth on back-to-back RBI singles by Danny Leikus and Cooper Sidell. Sidell led Gilman with two hits in four trips.

Matt Archibald was 2-for-3 with a home run with two runs scored and two RBI for John Carroll.

The victory moved Gilman (6-16 overall, 4-8 league) into a tie for sixth place with Mount St. Joseph and within a half game of John Carroll (10-9, 4-7) as the three are currently battling for the final two post-season spots.