Boys’ Latin School spoiled the Homecoming at Severn School on Saturday and, in the process, clinched a berth in the MIAA B Conference football championship game in November with a 28-6 win over the host Admirals. The Lakers also presented 16th year coach Richie Schell his 100th career victory.

Junior quarterback Brenden Crouse threw for 176 yards and two touchdowns completing 13-of-20 passes and ran the ball 16 times for 81 yards in leading the Lakers to their fifth win of the season (5-2 overall) and dropping Severn to 4-4 overall.

The Lakers are now 4-0 in the B Conference, as is St. Vincent Pallotti. The two will meet next week at BL and likely in the B title game. Boys’ Latin has already clinched its place in the championship contest because it owns head-to-head wins over Severn, Archbishop Curley and John Carroll, the only three teams that could possibly tie the Lakers in the standings.

Pallotti, which defeated John Carroll, 58-21, on Friday, needs one more win or one more loss by Archbishop Curley (1-2), which it plays in two weeks, to clinch its spot in the title game. Severn fell to 2-2 in the league and was eliminated for the championship picture because of its head-to-head losses to BL and Pallotti.

Any shot of a comeback by the Admirals, who were led by their senior quarterback Ben Bedard, who completed 15-of-23 passes for 150 yards and a touchdown, was nixed by a TD pass by Crouse and a two-yard TD plunge by Josh Pugh in the final quarter.

As soon as the game ended, the Lakers marched over to the Admirals girls lacrosse field in the shade and everyone took a seat on the field to pay tribute to Schell. BL Athletic Director Mike Thomas presented a huge framed Lakers’ jersey with No. 100 on it and the team took a photo with a banner that read: 100 One Heartbeat Thank You Coach Schell.

Schell, who was doused in Gatorade on the team’s sideline seconds before the game ended, thanked all of his assistant coaches, especially his offensive coordinator, Jim Sandusky who has been with him all 16 years.

When asked what the 100th victory means, Schell answered, “It means longevity at a school that I love.”

Shifting to the game, Schell said his players started to gain momentum after boosting their lead to 14-6 with 5:04 left in the third period on a Crouse 6-yard touchdown pass to Connor Walsh. The score capped a 15-play, 75-yard drive that give the Lakers control of the football game after holding a 7-6 lead at the half.

An ensuing 15-yard TD pass from Crouse to Devon Brewer and Sam Grace’s third of four extra-point kicks on the day made it 21-6 Boys’ Latin with over 10 minutes left in the game. With the way the BL defense was playing, that lead would prove to be too much for Severn.

“Severn is very similar to us in that we are very quick,” said the 6-foot, 185-pound Crouse who as a junior with a 3.8 GPA has already committed to play lacrosse at the Air Force Academy.

“This is my first year starting and we are committed to spreading things out.” 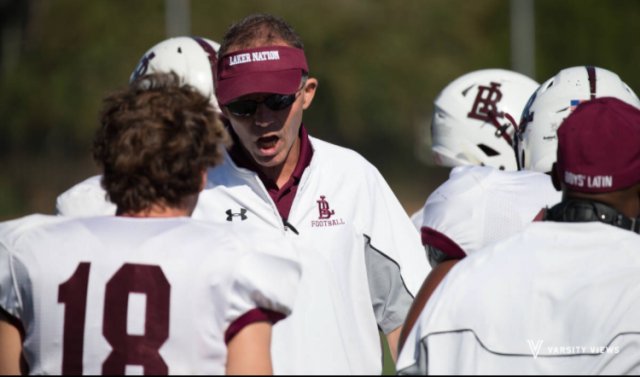 In the stat department, Brewer led the Lakers in rushing with 58 yards on 10 attempts, while Nick Lizana and Walsh led the Laker receivers with four catches each. Lizana had 87 yards in receptions.

Severn also had two guys with four catches each in Trent Kirchenheiter and Darby Nelligan.

Gilman rallies past St. Joe in the 5th