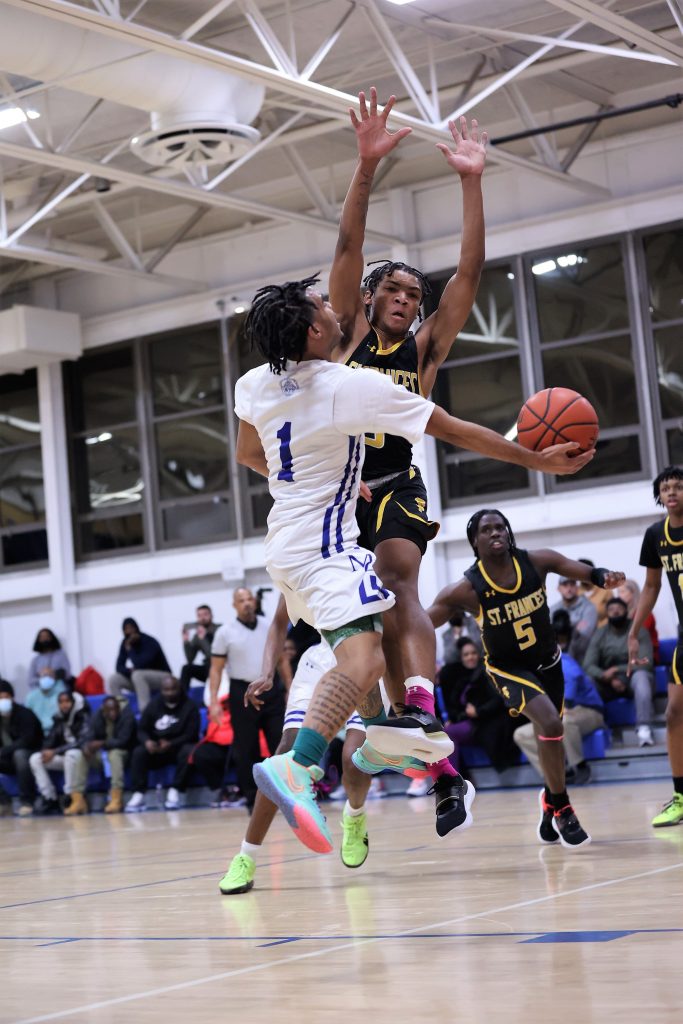 About 50 Our Lady of Mount Carmel students crammed the small stage behind the basket inside the school’s gym for Monday’s boys basketball game with St. Frances Academy.

The group, featuring a couple in costume, made its presence felt, cheering loudly for every Cougars basket or playfully heckling the visiting Panthers. The intimate setup is one of the unique home court advantages in the Baltimore Catholic League.

Tjay Beckles honored his classmates, as well as his teammates’ efforts, in a breathtaking moment. The sophomore hit a 3-pointer as time expired in overtime, giving the fourth-ranked Cougars a 75-72 victory over No. 1 St. Frances.

The Cougars mobbed Beckles, a reserve whose dagger from the corner ended St. Frances’ 26-game winning streak in BCL regular season play. The Panthers’ previous loss was on Jan. 17, 2020 at Mount St. Joseph.

What a difference a few hours made for Mount Carmel, which lost at No. 3 John Carroll School, 70-63, Sunday afternoon.

“We take it day-by-day…we took pride in defense,” said Perry, a captain. “Our coaches talked to us about pacing ourselves throughout the game, taking it play-by-play, and play a hard 32 minutes.”

It ended up a resilient 36 minute effort, culminating with Beckles, who got a pass from Bomgboye, and hit arguably the second biggest shot of the 51st BCL season.

Beckles said he was ready for the moment.

“I work on those types of shots everyday, Lu (Bomgboye) passed me the ball and as soon as I shot it, I knew it was going in,” said Beckles, who finished with six points. “I was telling my teammates how bad I wanted to win, how bad we wanted to win.”

The victory gives Mount Carmel a 9-5 mark in the BCL regular season, and likely a home game in the tournament first round in two weeks. The Cougars are in a virtual tie for second with Mount St. Joseph (8-4) which defeated Calvert Hall College Monday evening.

Two weeks ago, St. Frances (30-4, 11-1 BCL) used a big second half start to get past Mount Carmel, 71-65, inside Phelps Gym in East Baltimore. It was a much different story Monday in Essex as the Cougars got off to a 16-4 start in the first quarter.

Down 18-10 after one, St. Frances trailed 31-30 at halftime after a big three-pointer by junior Jahnathan Lamothe. The Cougars, behind 12 points (three 3-pointers) from Perry, led 53-46 entering the fourth.

The Panthers pulled even at 62 on a tough basket by Johnson with 1 minute, 37 seconds left in regulation. Perry converted off a drive, and after a Panther miss, Bomgboye got a Perry off-balance miss and slammed the ball through, giving Mount Carmel a 66-62 advantage with 1:09 left.

Lindsay pulled St. Frances to 66-65 with a 3-pointer with 54 seconds remaining. After a Mount Carmel miss, Lindsay was fouled by Beckles on a 3-point attempt with 10.7 seconds to play.

With Mount Carmel’s student section making noise, just 10 feet away, Lindsay missed the first two free throws before converting the third to tie the game at 66.

Lindsay, who’s committed to South Carolina, cleanly swiped the ball from Perry, attempting to dribble around Davis. Lindsay was fouled by Beckles with 1.1 seconds to play.

Lindsay, whose 3-pointer with five seconds left to beat Archbishop Spalding last month, was arguably the defining moment of the BCL/MIAA A regular season, missed the front of a one-and-one, and the game went to overtime.

Mount Carmel got a free throw from sophomore Andrew Dixon to start overtime, then Lamothe answered with a trifecta, giving St. Frances a 69-67 advantage. Perry was fouled on a shot attempt and converted two free throws, pulling Mount Carmel even with 3:03 remaining.

The Cougars regained the lead, 72-70, on Mitchell Kalu’s basket with 57 seconds left in overtime. Johnson was fouled by Bomgboye on a shot attempt with 24.8 seconds left, but Mount Carmel contend that the 30-second shot clock expired before Johnson’s attempt.

The game officials conferred and ruled that the shot clock buzzer never sounded and Johnson’s shot was valid. Johnson’s two free throws tied the game at 72.

Perry got the inbound pass into the lane and dropped the ball to Bomgboye on the baseline. Bomgboye turned and passed to Beckles, who hit the walkoff 3-pointer. 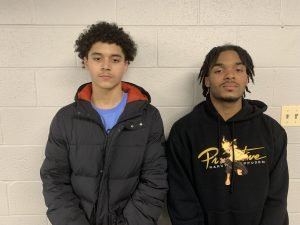 Tjay Beckles (left) was the hero for Mount Carmel Monday evening, hitting a 3-pointer as time expired in OT while Deon Perry finished with a game-high 28 points as Cougars locked up a home game in the upcoming BCL playoffs with their victory over regular season champ St. Frances.

“Every game is going to be different. It’s a battle playing in this league,” said Quinn. “You just hope to come out on top the majority of games.”

Quinn commended his team’s defensive improvement from the first meeting with the Panthers.

“I thought we played pretty good defense in the halfcourt,” said Quinn. “Nick (Myles) does a great job, he’s got really talented players. It went back-and-forth, and came down to the wire. It could’ve gone either way.”

Davis had 12 points and Carlton Carrington 10 for St. Frances, looking to become the first team since 2010 (Mount St. Joseph) to run the table in a full BCL regular season.

“I think we played really hard but didn’t execute,” said St. Frances coach Nick Myles. “Mount Carmel played really well. We’re going to get everybody A-game most of the time and Mount Carmel was really good. Maybe this is the extra motivation we need.”

The MIAA A postseason is next week. The BCL tournament starts March 2.

“It’s a big win for us, but we’re going to see them (St. Frances) again,” said Beckles.