Evan Fochtman’s crucial three-run dinger in the top of the sixth inning at Calvert Hall College’s Carlo Crispino’s Field in Towson Tuesday afternoon almost didn’t happen, but it pumped up a tiring Jordan Geber who went on to propel No. 2 Archbishop Spalding to a 7-2 victory over the top-ranked Cardinalin MIAA A Conference action.

The result left the returned Spalding, the three-time defending A Conference champion, back into first-place at 8-1 in the league. The Cavaliers (11-2 overall) have now reeled off seven in a row over the Cardinals (14-2, 7-2 MIAA A) dating back to 2015 when the Hall took the first of four meetings between the two by 3-0 in the last week of March.

That was the last game the Cardinals won over the Cavaliers since as the latter took the final three in 2015 to win its second MIAA A Conference crown in a row and made it three in a row last season by knocking off the Cards by scores of 5-2, 3-0 and 5-4. Spalding went wire-to-wire as VSN’S top ranked team in 2017 (27-5) but after what appeared to be a severe sting by the graduation bug, the Cavs started this season ranked No. 4.

Tuesday, Spalding looked like the champions they have been the last three years and it may be an understatement to say they have simply refueled and are itching to get back to the top of the high school heap of premier teams.

“This was a huge win for us, a great win for first place,” said Spalding’s fifth-year coach Joe Palumbo, who considered having Fochtman squeeze bunt with his team winning 4-1 in the top of the sixth with no outs and runners on first and third.

The coach, whose last name is synonymous with high school and professional baseball in the Maryland area, changed his mind and was glad he did. Palumbo gave Fochtman the green light to swing the bat against Calvert Hall reliever Andy Rosso.

“I got a curve ball on the first pitch and I was looking for another one on the second pitch and it hung a little, ‘’’ said Fochtman, a senior leftfielder who is also an outstanding football quarterback  headed to the US Naval Academy. “”I hit it good and it went out. When I was rounding third, coach told me he had thought about squeezing.”

Geber (4-1) and Calvert Hall starter Matt Hentschel were locked in a 0-0 tie after three innings and each righthander seemed to be in control. Spalding got to Hentschel in the fourth as Matt Palumbo, a cousin of the coach and the second youngest of 26 grandchildren in the Palumbo clan, started things with a triple to left-center.

Nick Vermillion and Peter Godrick would follow with RBI singles and No. 9 hitter Nick Benitez singled in a pair as the Cavs chased Hentschel in favor of lefty Brennan Maher, who was coming off a 5-0 shutout of No. 8 St. Mary’s on Friday.

After the big inning, Geber got through the bottom half with no problem, but started to tire in the bottom of the fifth loading the bases with two outs and the Cards’ No. 3 and leading hitter J.P. Murphy (.395, 14 RBIs and two homers) coming up. Geber pitched Murphy with great caution before walking him to force in the Hall’s first run.

“Yeah, I was careful because I knew he was their best hitter,” said Geber. “I didn’t want to give him anything good to hit and then I got the next hitter to pop up.”

Fochtman’s long fly with two mates aboard in the top of the next inning gave Geber a shot of adrenalin and the latter retired the Cards in order in the bottom of the sixth. Palumbo would remove Geber in the bottom of the seventh when he issued his third walk and third hit batsman  – No. 9 hitter Jose Torres was plucked for a second time and later scored on an infield error to close the scoring.

“It’s just one game in the season,” said Cardinals coach Lou Eckerl. “We had won 12 in a row and what were we to do win 13 in a row. Spalding capitalized on opportunities and we didn’t. Spalding, St. Mary’s, Gilman and us are the top teams in this league. It’s wide open.” 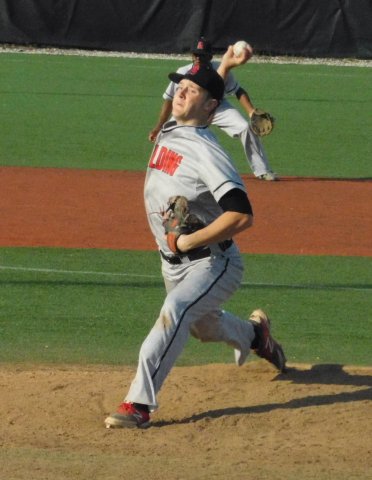 10 Years of Excellence: VSN’s No. 3 Boys Soccer Forward of the Decade