On the surface, Severn School boys’ basketball didn’t have much to play for going into Friday’s MIAA B Conference match against Chapelgate Christian School. The Admirals’ playoff fate was determined while Yellow Jackets needed a victory to bolster their postseason hopes.

Severn struggled for most of the contest, but regrouped when it mattered. The 19th-ranked Admirals held off Chapelgate, 55-54, in Marriottsville.

The Admirals tightened up defensively in the fourth quarter, grinding out momentum for next week’s playoffs. Severn will host Archbishop Curley in a quarterfinal contest on Tuesday.

“That’s a sign of a good team, you’re struggling on the road against a talented team that’s desperate to get into the playoffs and find a way, that says something about your character,” said Admirals coach VJ Keith.

“We had a pretty rough offensive night, our usual scorers weren’t really scoring,” said Admirals junior guard LJ Owens. “We just had to find a different way and today it was the defense.”

Severn kept the Yellow Jackets to a field goal over the final three minutes. The Admirals smothered Chapelgate on the perimeter in the final seconds, forcing the hosts to use their remaining timeouts.

After relinquishing a four-point advantage, Severn got a basket from Lilly and two free throws from sophomore AJ Birch to reacquired the lead at 53-52 with 47.4 seconds remaining in regulation. Chapelgate called timeout with 22.5 seconds remaining to set up a play, but couldn’t get off a clean entry pass and called another timeout.

The Yellow Jackets got the inbound pass to junior post Jason Murphy, who missed and Severn guard Kendall Harmon got the ball and was fouled with 14.8 seconds left. Harmon converted both one-and-one free throw attempts, advancing the Admirals’ lead to 55-52.

Chapelgate got the ball back downcourt before calling its final timeout with eight seconds to play. Murphy scored in the paint with five seconds left and the remaining time ran out.

The Yellow Jackets trailed 45-41 in the fourth, but a 3-pointer and basket from Morant gave them the lead with more than four minutes left in regulation. Murphy followed with a basket off an offensive board, making it 48-45.

The Howard County school led 50-47 after Cliff McEachin’s basket with 3:02 to play, but Chapelgate didn’t score another basket until Murphy’s score in the waning seconds. The Yellow Jackets came in Friday’s regular season finale with several scenarios to get into the postseason, the easiest being winning its season finale and St. Mary’s losing to Annapolis Area Christian School.

Chapelgate and St. Mary’s finished with identical 5-8 league records, but the Saints captured the final spot out the Red Division on a tie-breaker (St. Mary’s defeated Severn).

“It’s disappointing because now we’re watching these two other games,” said Frierson, standing outside his office. “It hurts something bad because it’s a one-point game and you’re at home. It’s tough to swallow for these guys.”

The MIAA B playoffs are set as AACS, Curley, Friends School, St. Mary’s, St. Paul’s and Severn will vie for the title. Severn will host Curley and St. Mary’s visits Friends in Tuesday’s quarterfinal round.

Red Division first-place finisher AACS, seeking a title breakthrough after losses in the 2016 and 2015 final, will host the St. Mary’s/Friends survivor in a semifinal match on Thursday. St. Paul’s, which placed first in the Black Division, will welcome the Curley/Severn winner in Thursday’s other semifinal. 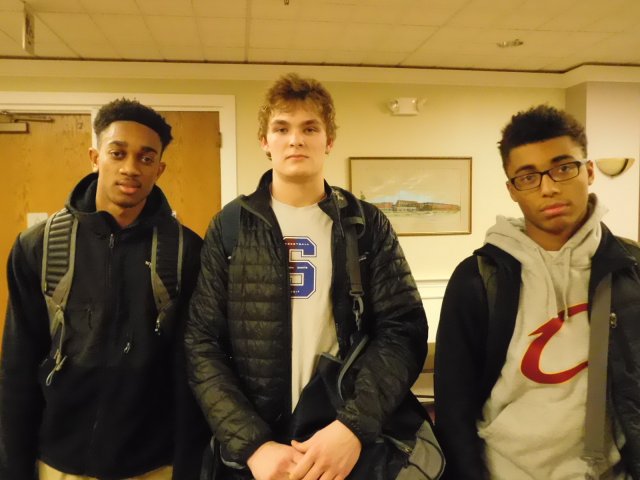 The title match is tenatively set for Feb. 26 at APGCU Arena at Harford Community College.

Severn, which has yet to win a MIAA basketball title, is confident after Friday’s gut check performance.

“You know you’re going to have tight games in the playoffs so it’s nice to go through a tough game and find a way to win,” said Keith. “It’s a dogfight in the playoffs.”

The most wonderful time of the year

McDonogh ascends to the top