Clear blue skies and a temperatures hovering around 62-degrees served as the perfect backdrop as Archbishop Spalding welcomed Loyola Blakefield to Anne Arundel County, Monday afternoon, for an MIAA A Conference baseball game. 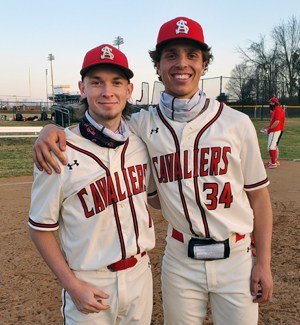 Eddie Sargent and Thomas Joseph paced Spalding at the plate. Each had a double and a single, and Joseph had 2 RBI’s.

As high school sports continue to gain momentum in their return, it was a pure slice of heaven to hear the pop of the glove and crack of the bat replace the silence of the last year.

As for the game, Spalding (3-0 overall, 2-0 MIAA A) remained jumped out to a quick 4-0 lead and scored eight times in their first four at bats to defeat the Dons, 8-3.

Loyola (0-3, 0-3) had a chance to score in the top of the first, after Mason Burke smashed a two-out double to deep right. Clean-up hitter Jack Belbot followed with a base hit to center, but Burke was tagged out at the plate on a great throw from Cavs’ centerfielder Cody Sharman that kept the Dons off the board.

The Cavaliers then got two quick runs in the bottom of the first, keyed by a bases-loaded double to deep left from Kyle Garrett, and they added two more in the second when Thomas Joseph ripped a two-run double off the right field fence.

Loyola answered with two runs in the top of the third to cut Spalding’s lead in half, but the Cavs answered with a run in the bottom of the third, and three more in the home half of the fourth to put the game out of reach.

In addition to Garrett, Eddie Sargent and Joseph each chipped in with a double and a single, and Joseph added two RBI’s.

Sargent started on the mound for Coach Joe Palumbo, giving way to Zach Ford, who threw 2.2 strong innings in relief to notch the win.

Ford said, “I kept the ball low, threw my two-seamer in on their hands, and trusted my infielders.” 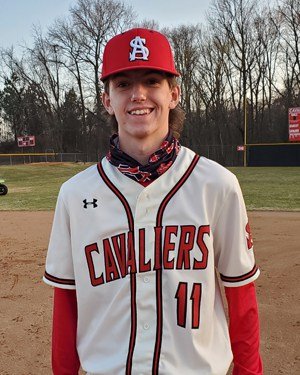 Zach Ford notched the win in relief. He surrendered just one run in 2.2 innings of work.

“We played phenomenal defense, especially our up the middle, and we got a huge, huge effort from Zach (Ford), in relief.”

Joseph said that the Cavs had great at bats all day.

“We weren’t sure if we would even have a baseball season due to COVID this year, and we had little time to prepare.”

Palumbo summed it up by saying, “We are very deep on the mound and I am very happy with the way our pitchers performed today. Our pitching sets up well, with A Conference games coming up on Wednesday and Friday.”

Loyola coach Mike Kelly got big day from leadoff hitter Ryan Wright who pounded two doubles and a single, and scored two runs. In addition, Burke had a double and a single, and Kyle Luong had a pair of singles.

Pictured above: Archbishop Spalding’s Kyle Garrett, who got the Cavaliers on the board with a two-run first inning double, readies for his next swing.