When the John Carroll softball team roared out of the gate with six straight victories, including wins over IAAM A Conference powers Archbishop Spalding and McDonogh, the 2017 season seemed full of potential for the Patriots.

As suddenly as they rose, however, the Patriots sank with seven consecutive losses, including a pair of defeats at the hands of Mount de Sales. 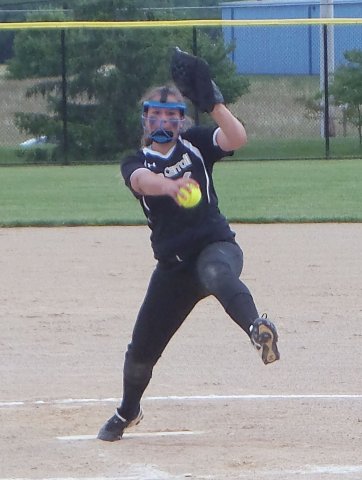 With one game left in the regular season, the JC season took another sudden turn as the Patriots stopped their losing skid with a win over Seton Keough. They followed that up with a 3-2 win over Catholic in the IAAM quarterfinals, an impressive 9-3 win over Spalding in the semifinals and an equally impressive, 7-2, win over Mount de Sales, Tuesday, in the IAAM A Conference championship game, at Harford Community College.

The victory, keyed by several big offensive performances, and the perseverance of sophomore pitcher Emma Kropkowski, produced the Patriots first ever A Conference championship and their first softball title of any type since 1999.

“It feels great,” said Kropkowski, who went the distance in the circle, allowing just four hits and one earned run. “It was unexpected. It started off with workouts this winter. From there we knew we would come together. We all get along very well, so I think it meshes the team pretty well.”

Mount de Sales (13-8) struck first, scoring a single run in the bottom the second inning when Maggie McGuire reached on a bunt  single and later scored from third on a wild pitch.

John Carroll (10-7) countered with two runs in the top of the fourth and would never trail again. The Patriots added two more runs in the fifth and three in the sixth.

In the the John Carroll fifth, freshman Emma Ritter, who was four-for-four in the contest, lined an RBI single to right to score Meg Sheehan, who opened the inning with a single. Later in the inning Ritter scored on a single by fellow freshman Jules Donnelly.

Mount de Sales got a run back in the home half of the inning when McGuire drew a bases loaded walk, before John Carroll capped the scoring with three in the sixth. Meg Sheehan had an RBI double, Kropkowski had an RBI triple and Emma Ritter drove in a run with a single.

The Sailors, who were making their fifth consecutive appearance in the championship game, mounted one more threat, loading the bases with no one out on a hit batter, a walk and a single. Kropkowski, however, dug deep, retiring the next three batters in order to close out the contest.

“We started off really strong this season and then had some adversity,” said John Carroll coach Sherry Hudson. “We came back from that and we’re just a hard working team.”

Hudson said she had build the team’s confidence during their mid-season slide.

“We told them to be confident and be aggressive, and do what we’ve been doing all season. That’s hitting the ball and Emma pitching a good game,” added Hudson. “Emma was our only pitcher all year. She kept us in every game. She has a lot of guts and I appreciate her hard work. She hit a few bumps too. I think she got a little tired throughout the season, but she came back strong.”

Meg Sheehan finished 2-for-4 with two runs scored and an RBI, Ritter had two RBI and a run scored with her four hits, and Shannon Sweekeny was 2-for-3 with a run scored and two RBI.

“I was really happy for the girls, representing John Carroll,” said Hudson. “I don’t think we’ve ever won an A Division softball championship. I am really proud of them and all the hard work.”

The game also marked the end of the line of long-time Mount de Sales coach Pete Waskiewicz, who his retiring after a 24-year career with the Sailors.

“Absolutely, you would like to ride off into the sunset and all that good stuff,” said Waskiewicz. “I’m glad we got here. It was a rough season. We did what we had to do to get here.”

St. Joe knocks off No. 1 Spalding

Hounds expect to be in hunt