A Hall of a win

“I don’t think we’ve ever played them,” said Bauresfeld, a 1994 Hall graduate. “But we don’t schedule any bad teams. That’s something I learned from coach (Mark) Amatucci.”

In front of a packed audience inside Alumni Memorial Gym, the No. 3 Gators made their trip to the Towson school memorable by taking a hard-fought 61-57 victory over the 10th-ranked Cardinals. Junior forward Anthony Higgs scored 20 points for Perry Hall (3-0 overall), and Tyler Holley added 12.

It’s the second victory over a MIAA school in the early season for the Gators, who reached the Class 4A state semifinals last season. Perry Hall opened the season with a 65-43 verdict over Archbishop Curley.

There was much anticipation for Thursday’s game with fans filling the gym long before the tip-off.

“Everybody was looking forward to this game,” Gators senior point guard Aaron Butler said. “Our fans are very loyal.”

Senior forward Darrell Green smiled when he said, “we were ready” for a fast-paced game that featured eight lead changes. The Gators had the game’s largest lead, 40-31, with under three minutes left in the third quarter after an 8-0 surge.

The Baltimore County squad did it without help from 6-foot-8 junior point forward Laquill Hardnett, who was whistled for his fourth foul early in the period and was sent to the bench. Higgs, senior guard James Rider and a slew of other Gators picked up the slack in Hardnett’s absence.

“His game has grown immensely,” said Perry Hall coach George Panagetou of Higgs. “He can shoot and jump out of the gym. They work on alley-oops all the time in practice.”

Calvert Hall (3-5), which received 18 points from junior Brendan Adams, outscored Perry Hall, 16-6, over the next eight minutes to take a 47-46 advantage in the middle of the final period. Josh Cornish (14 points) started the run with a pretty fade-away jumper and finished with a 3-point swish from the top of the arc. In between Cornish’s shots, freshman forward Justin Lewis and junior forward Xavier Gravette helped the Cardinals’ rally flourish.

With Hardnett back on the court, though, Perry Hall made big plays down the stretch — including Butler’s rainbow in the paint and Hardnett finding Higgs, who led all scorers with 20 points, on a fastbreak — to seal the win.

How did the Gators manage to remain in a position to win with Hardnett only contributing four points?

“It was heart over hype,” Butler said. “It was next man up. We had each other’s backs.”

Panagetou was appreciative of the opportunity to play the MIAA A/Baltimore Catholic League stalwart. The Gators have an ultra-daunting non-league schedule with a home match against defending Baltimore City Division I champ and second-ranked Poly next Thursday. 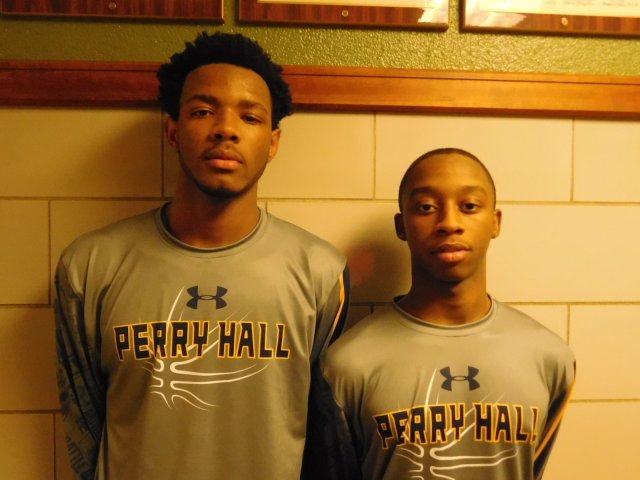 “(Feeling) the vibe and from what my players were telling me, I knew it would be a great crowd,” said Panagetou, whose team has a league match at Milford Mill Academy Friday evening. “And I want to thank John for us being able to finally get together.”