In a battle of MIAA A Conference basketball division leaders Wednesday night in Owings Mills, top-ranked Mount St. Joseph showcased its vast depth and versatility as it methodically wore down fifth-ranked McDonogh School and pulled away for 65-46 victory, staying undefeated in conference play.

After sparring with the host Eagles throughout the first quarter and much of the second, St. Joe (21-1 overall, 12-0 MIAA A) closed the first half on a 14-2 run, which included scoring the final 10 points of the second quarter, to turn an 18-17 deficit into a 31-20 halftime advantage.

The turning point came during the second quarter run when the Gaels stopped settling for outside shots and began to execute their half court offense. That led to three consecutive interior baskets by 6-foot-10 center Jalen Smith, who scored eight of his 14 points in the second quarter.

“We felt our advantage was getting the ball into Jalen (Smith) and getting it out on transition. The jump shots, you can get them any time,” said St. Joe coach Pat Clatchey, whose team is ranked 24th in the nation by USA Today. “We needed to attack the rim and get shots on the interior and that’s what we did in parts of the second quarter and the latter part of the game.”

Sophomore guard James Bishop was a key piece in the turn-around as he was able to penetrate and create his own shot or kick the ball out for an open look. Bishop paced the offense with 17 points and made several key defensive plays. Senior Darryl Morsell added 12 points and senior Jaden Robinson scored 11 points.

“We knew it was going to be a tough game, a tough crowd, but we knew we had some size on the inside so we just tried to feed the big man, play hard and get stops,” said Bishop. “Knowing we have something to prove every night, we know we get everybody’s best game, so we have to come out and  play hard, get stops and try to win every night.”

Robinson was the Gaels defensive stopper, making plays on both ends of the court.

“Coach really harps on it, playing defense and playing both ends of the court,” said Robinson. “Darryl and I also switch off on the (other team’s) best player, so we can take turns. On the offensive end we just run our sets and whatever comes, we let happen.”

For the second consecutive game, Clatchey singled out Robinson for praise, as well as reserve guard Kendall McMillan, who gave the Gaels excellent minutes off the bench.

“Jaden Robinson has really stepped up the last four or five games. We’ve been playing without Nigel Jackson due to an injury. It’s a team effort. I thought Kendall McMillan really came in and gave us great defense, handled the ball and made athletic plays,” said Clatchey. “We rely on Darryl, Jalen and James to score, but the other guys did a really good job in other aspects as well.”

McDonogh got strong offensive efforts from its two stars – junior Noah Locke and senior Damian Chong-Qui – as the pair combined for 30 points. Senior Jaeden Willis added eight points for the Eagles, but there was not much additional offensive support.

“They are a really good team. They executed offensively and especially on the defensive end,” said McDonogh first-year coach TJ Jordan. “Their defensive pressure was phenomenal, they hit the glass on the offensive end and I think that dictated the game.” 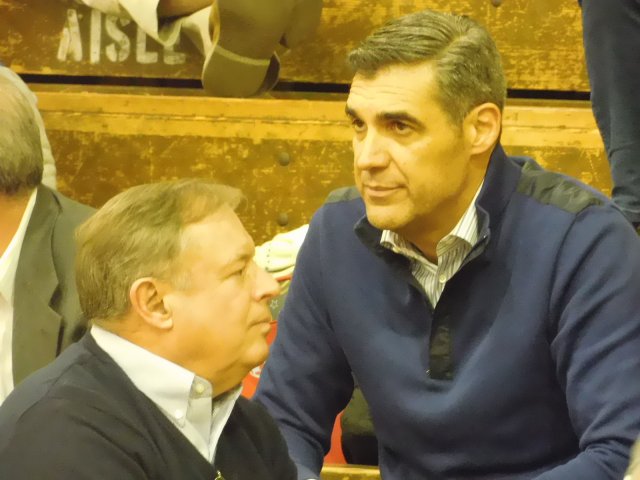 Both teams still have healthy leads in their respective divisions, with the Gaels running away from everyone in the Black Division and the Eagles now holding a three-game lead over St. Vincent Pallotti (4-4), Mount Carmel (4-4) and Calvert Hall (5-5) in the Red Division.