A breakthrough for Boys’ Latin lax

The Boys’ Latin-Gilman lacrosse rivalry is as storied as the game itself, but in the previous four years, all one goal victories for Gilman, the match-up has proved to be a sour pill to swallow for the BL faithful.  The taste got a little sweeter on Friday, however, as the top-ranked Lakers made the short trip to Gilman and gutted out a 9-7 MIAA A Conference victory over the No. 8 Greyhounds.

Early on Gilman (7-3, 3-1) appeared poised to deliver another tough blow to their rivals as the Greyhounds raced out to a 3-1 first quarter lead on the strength of consecutive unassisted goals by William McBride, Andy Matthews and Tyler Ruhl.  Boys’ Latin, however, countered with five consecutive goals over the remainder of the first half and carried a 6-3 advantage into the halftime intermission.  Gilman hung in the contest until the end, but never got closer than two goals.

Determined not to graduate without a win over Gilman, the BL seniors made the difference in the contest, keeping the Lakers (12-0, 4-0) undefeated in the process.  Ben Pridemore led this group with two goals and two assists, Colin Heacock had two goals and goalkeeper Christian Knight made 13 saves in the cage.  In addition, junior Shack Stanwick had a goal and two helpers.

The recent losses to Gilman were certainly a motivating factor on Friday, according to Boys’ Latin head coach Bobby Shriver.

“The last four, everyone knows, have been one goal games.  We lost them all, three of them in overtime,” said Shriver.  “What we try to tell the kids is that you’re not making all of those up in one fell swoop.  It’s just not going to happen.  Let’s try to win this one and try to make one amend.”

Gilman shaved one point off its halftime deficit as it held the Lakers scoreless in the third quarter, while Matthews scored early in the second half to pull the Greyhounds within two, at 6-4.  Gilman was briefly awarded a second third quarter score, with 7 minutes to play, but a shot from Chase Wittich was eventually waived off after the officials huddled and ruled that it had lodged in the side of the net.

The Greyhounds kept the pressure up early in the fourth quarter, but missed a golden opportunity when a quick three-shot flurry failed to put anything on goal.  This sequence was followed by a one-minute unreleasable penalty against Gilman, which led to an extra-man score by BL’s Devin Shewell, assisted by Keegan O’Connor, and a Pridemore score, assisted by Stanwick, which came just one second after the penalty expired.  The goals pushed BL’s lead to 8-4.

Zeke Morrill gave Gilman a spark when he made a steal in front of the Boys’ Latin goal and quickly stuffed it in the net, with 6:47 to play.  The Greyhounds then moved back within two scores when William McBride assisted a Max Greene goal, cutting the Lakers’ lead to 8-6 with 5:41 remaining in the contest.

With 2:04 remaining, Knight made an outstanding stop from point blank range, returning the ball to the Lakers.  Coming out of a timeout, BL isolated Heacock on the right side of  box and he went strong to the goal and powered home the clincher with 1:40 to go.  Matthews added Gilman’s final goal with four seconds left on the clock.

Moving to 4-0 in conference play is critical according to Shriver. 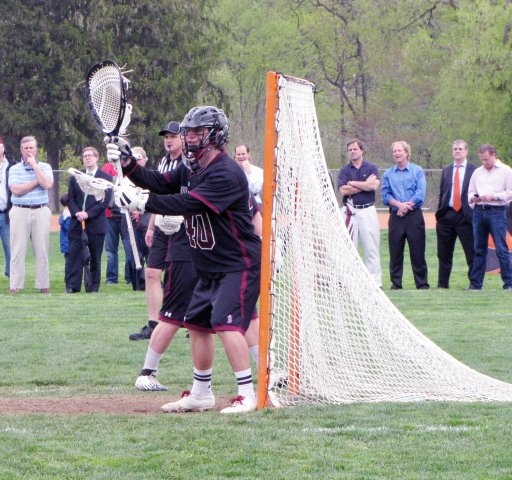 “(In) the MIAA you only play nine league games now and this is one of the elite teams and we won the game, so this is good for us going forward,” said the veteran coach.  “We only have five league games left.  The season’s over in a blink of the eye.”

Pridemore spoke to the rivalry and the significance his team put on the contest.

“(The) first quarter we started off a little slow, a little slower than we like to, but it’s the neighborhood rivalry.  We all know these kids, right from the street.  It’s a huge rivalry game,” said Pridemore, who will play at Penn State next year.  “It was really intense.  We wore all blacks [uniforms] today and once we got things rolling, they started clicking for us and we came away with a W.”

Heacock, who will play at the University of Maryland next spring, said his team had to be focused to win this battle with Gilman and adverse weather conditions.

“The past couple of years we played Gilman and they won by a goal.  We knew going into this game it was going to be a well coached game by them and they have great players,” said Heacock.  “It’s rainy out so you have to do the simple things on offense to get the goals and come out with a win.”

10 Years of Excellence: VSN’s No. 3 Defensive Back of the Decade