“What’s our name?,” the players said. The sound echoed through John W. McDonogh Stadium under the crisp fall air.

The Panthers capped an emotional week with a 34-20 decision over the top-ranked Eagles in a MIAA A Conference football contest. Senior quarterback Isaiah Robinson threw 4 scoring passes to Randy Fields for St. Frances, and Temple University commit Isaiah Blackwell ran for a score.

With teammate Tyree Henry recovering from a spinal bruise, the Panthers (7-1 overall) overcame a slow start to improve to 2-0 in the area’s toughest league. The East Chase Street school dedicated to win to Henry, who was injured early in the second half of last week’s victory at Gilman School.

Henry, a junior, fell motionless to the turf after a short reception. He appeared to be unconscious briefly and, after regaining consciousness, he indicated he could not move or feel his legs. Emergency personnel responded and Henry was transported to Johns Hopkins Children’s Center.

Henry began to regain feeling in his legs prior to being transported from the field. St. Frances coach Henry Russell said Henry is recovering at Kennedy Kriger Institute.

“It’s tough seeing your teammate where he is right now. These guys loved him and it was a motivating factor all week,” said Russell. “You don’t want to let him down because he’s fighting for all of us.”

“I was devastated. I didn’t know how to act. I went into practice very humble, and it was like ‘It’s time to work,'” said Fields. “We got the job done tonight.”

Fields, a transfer from now-defunct Eastern Christian Academy, put together one of the season’s best performances. The 6-foot-3, 190-pound senior caught 13 passes for 200 yards with scores of 2, 23, 21 and 13 yards.

“I couldn’t do it without my team. They were with me with through it all,” said Fields. “We did it for 4.”

After losing 48-0 to McDonogh last season, St. Frances’ reversal of fortunes came in a 17 second frame Friday. Brightwell, who rushed for 132 yards, scored from a yard out with 4:17 left before halftime, completing an 8-play, 56-yard drive.

On the next play from scrimmage, Panthers linebacker Kingsley Jonathan intercepted Eagles quarterback ‘s pass in the flat. Robinson threw a strike across the middle to Fields, who got into the end zone, extending St. Frances to 20-7 with 4 minutes remaining in the first half.

The Panthers’ defense assembled three-and-out, and the offense continued its stride. St. Frances went 70 yards in 12 plays as Fields caught his third score of the half – a 21-yarder with just 15 seconds left before halftime.

“We just kept feeding him the ball,” said Robinson, who completed 20 of 28 attempts for 254 yards.

“We rode him tonight big time,” said Russell. “It’s great to see a kid like that step up for a teammate.”

McDonogh (5-2, 1-1 MIAA A) grabbed momentum at the start of the second half, going 75 yards in less than two minutes as Dejuan Ellis scored from one yard. The Panthers went three-and-out on their next possession, but Darion Mckenzie pinned the Eagles at their 1 with a 49-yard punt.

McDonogh didn’t get past its 10 before punting and St. Frances started its next drive at the Eagles’ 35. Seven plays later, Fields landed in the end zone with his fourth score, putting the Panthers in control, 34-14.

“Everything we throughout the week was about Tyree. We called him every night,” said Jonathan, Henry’s roomate who’s committed to Syracuse. “He told us not to come back without a win.”

It didn’t start well for St. Frances, which won in Owings Mills in its prior trip in 2014. Robinson was intercepted by Eagles senior Mylique McGriff on the game’s opening play from scrimmage. Marquis Thornes caught an Ellis slant pass and went 23 yards into the end zone.

Robinson fumbled on the Panthers’ next offensive play. But St. Frances got on track, finishing with 432 yards Friday, despite being called for several holding penalties. For the second straight week, the Panthers collected more than 150 penalty yards, which concerns Russell.

But St.. Frances has been resilient and appear primed for a run at the MIAA A championship. A year ago, the Panthers were winless in league play.

“These kids have been through so much in their lives. Every single kid could write a book about what they’ve been through,” said Russell, who’s in his first year at the small east Baltimore school after being a longtime assistant at Gilman. “What stuff happens, there’s no quit. They just keep coming, they keep coming. 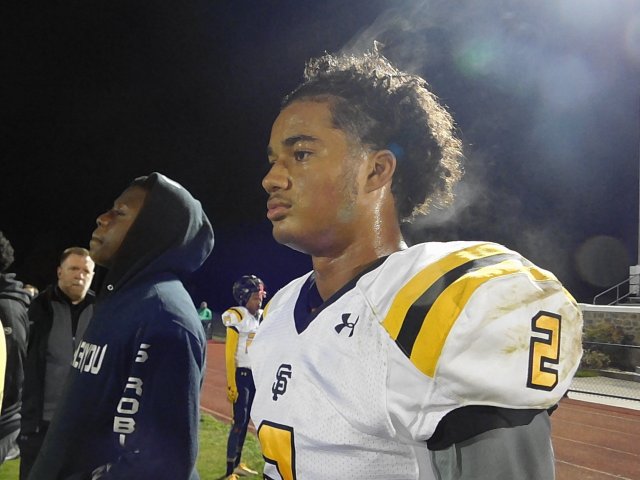 Every day getting to practice is tough. Some days, we don’t know where we’re practicing at. They don’t ever complain, they just go to work and play for each other. When you have that, you can overcome tough things.”

Too big, too talented, too fast