The decision to name our VSN Wrestling Coach of the Decade was extremely difficult, as the coaches of the area’s two most dominant programs – Mount St. Joseph’s Harry Barnabae and McDonogh’s Pete Welch – each had compelling arguments for the honor.

Both are two-time VSN Coach of the Year winners, both have multiple MIAA and private school state titles and both have produced a multitude of big time tournament champions.

Ultimately, with a big tip of the cap to Barnabae, Welch is the clear choice based on his slight edge in league titles and the fact that before him there was only one such dominant program in town.

It was that close.

It always seems to be that close when McDonogh and Mount St. Joe compete for anything in wrestling, but that was not always the case. St. Joe has been an elite local and regional wrestling power dating back to 70’s.

The start of McDonogh’s rise to prominence dates back to 1994 when Welch arrived at the Owings Mills school for what he believed would be a brief one year stay, to gain some experience as a teacher and coach, before returning to North Carolina, where he had just completed an All-American wrestling career at the University of North Carolina.

After one year as an assistant, Welch took over as head coach for 1995-96 season and North Carolina became a fond memory.

It took only four years to win his first MIAA A Conference dual meet and tournament titles (in 1999-2000). The Eagles won both championships again the following year and have have captured nine more dual meet crowns and seven more MIAA Tournament titles since.

“Clearly this is a school and program recognition,” said Welch of the honor. “Over the years we have enjoyed much success and quite a bit of heartbreak. Either way, I am proud of the program’s resiliency. Even in our not best years statistically, we managed to find a way to compete at a high level. We won six state titles, but finished runner up 11 times. As much as I don’t love that stat, I believe it says something about our ability to consistently stay competitive.” 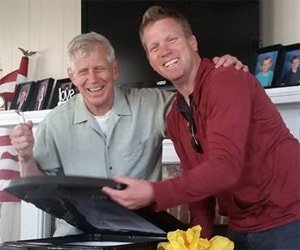 Pete Welch followed the footsteps of his father John (left) very closely, building a Hall of Fame coaching career at McDonogh, as his dad did at Ridge High School (NJ), Pete’s alma mater.

McDonogh won both MIAA titles last winter, completing the season just prior to the start of the COVID-19 pandemic, snapping St. Joe’s four-year strangle hold on the titles. The Gaels’ surge followed McDonogh’s four straight dual crowns between 2012 and 2015. McDonogh also won the MIAA Tournament in 2012, 2013, 2014 and 2016. The only other schools to break through in the MIAA over the last decade were Archbishop Spalding, which took both championships in 2010-11, and John Carroll, which won the 2015 tournament title.

“I didn’t think it was going to be 27 years later,” Welch said of his tenure at McDonogh after being name VSN’s 2019-20 Coach of the Year. “My wife and I had just gotten married and spent one year as an assistant and was going to head back down to North Carolina and that area where her family is from. Then they needed a head coach, so I took over the program after my first year and just put roots in the ground in Maryland ever since.”

A native of New Jersey, Welch wrestled for his father John at Ridge High School and won a New Jersey state title as a senior. At North Carolina he won 108 career matches and earned All-American status at the 1991 NCAA Tournament. In 2015, he received the ultimate honor when he was enshrined into the National Wrestling Hall of Fame, joining his dad who was inducted into the New Jersey chapter in 2003. In being named VSN Coach of the Decade he also matches another achievement of his dad’s, as John Welch received the same honor for the decade of the 80’s in New Jersey.

Welch has nothing but respect for Mount St. Joseph and the rivalry the schools have developed on the wrestling mat.

“Anytime we wrestle St. Joe anything can happen,” he said. “There where years where they were better than us, but we took them really tight and beat them or almost beat them. Then years when we were better than them and they either took us tight or beat us. That’s just the way it’s been the last 15 years between our two programs. It makes it fun. It’s a great rivalry that I hope continues for a long time.”

In keeping with the theme that is award is a team honor, Welch praised those who helped him build success at McDonogh.

“We have been able to maintain our level of excellence over the years thanks to a completely loyal and committed coaching staff that shares in the workload and passion for the sport. We have a school that values positive athletics and supports the pursuit of excellence. We have enjoyed parental support and encouragement like no other. This has truly made our program a family. We have alumni that continue to take great pride in the school and program. Lastly we have a tradition of amazing kids that have unselfishly worked hard year in and year out, putting the team first. Many of these amazing kids, but not all, happen to be great wrestlers too. I am so proud of everyone of them.”