10 Years of Excellence: VSN’s No. 2 Boys Golfer of the Decade

Rij Patel was a model of consistency during a stellar four-year career at McDonogh.

That consistency was also sometimes frustrating for Patel, who was a runner-up three times in the MIAA individual championship.

Two of those near-misses were against VSN’s No. 3 Golf Player of the Decade Chris Navarro. 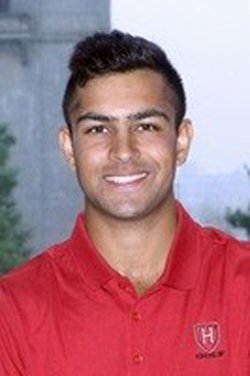 As a sophomore, Rij Patel was named 2nd-Team All-Ivy League at Harvard University.

As a freshman, Patel was leading the event after two days until Navarro surpassed him on the third day.

“He outplayed me that day,” Patel said.

A loss to Severn’s Eric Hall in another MIAA final would be just the first competition between the two standouts, who would square off against one another in the Ivy League when Patel was at Harvard and Hall at archival Yale.

Patel was not shutout completely in prestigious tournaments, considering he claimed the coveted Maryland Junior Amateur Championship in 2015 by overcoming a three-stroke deficit on the final hole after draining a clutch 25-foot putt for a birdie and his opponent posted a double bogey.

Patel prevailed on the second playoff hole to secure the victory, missing what is believed to be the Argyle Country Club course record by a single stroke.

However, at McDonogh, Patel and the Eagles were never able to “get to Caves (Valley Golf Club)” for the team championship round.

Nevertheless, he always caught the eye of Calvert Hall coach Drew Forrester for the same kind of quality putting and chipping Patel displayed during that dramatic rally to take the Maryland Junior Amateur Championship.

“He had the best short game in the conference,” Forrester said. “His touch around the green was superb. It was magnificent.”

Patel, VSN’s No. 2 Boys Golf er of the Decade, always put in the work to warrant such praise.

“I don’t hit it crazy far off the tee,” he admitted. “But I keep it straight pretty well. I hit it far enough to be dangerous, but I’m not going to overpower the golf course.”

Maybe that’s why the 5-foot-10, 150-pound Patel worked so assiduously to refine his technical skills on and around the greens through numerous repetitions of high-pressure matches.

He added that once the technical aspects of putting is mastered through constant repetitions to simulate matches, the most important component of the game is to believe in your ability through visualization.

Patel was a Second-Team All Ivy selection as a sophomore and finished seventh at Fairfield University’s Ryan Lee Memorial Tournament while guiding Harvard to a first-place team finish in the truncated 2020 season.

A management consultant who splits time between Baltimore and D.C., Patel said that he continues to participate in local, regional and national tournaments.

“He was an absolutely wonderful competitor,” VSN’s Golf Coach of the Decade Rick Collins said.